Martha suggests the following conditions that just might turn into potential blockbuster diseases – the ones that Big Pharma hopes you get this year:   END_OF_DOCUMENT_TOKEN_TO_BE_REPLACED

Drug companies are acutely aware of what’s called the ‘patent cliff’, when their expensive brand name medications lose their patent protection, thus opening up the market for cheaper, identical generic competition. This is good news for consumers, but very bad news for Big Pharma. Lipitor*, for example, Pfizer’s blockbuster cholesterol medication, is set to fall off the patent cliff in 2011.

But even last year’s sales of the biggest selling drug on the planet already showed declines due to growing competition from other cholesterol drug manufacturers.  See also: Is Big Pharma Onboard the Titanic? END_OF_DOCUMENT_TOKEN_TO_BE_REPLACED 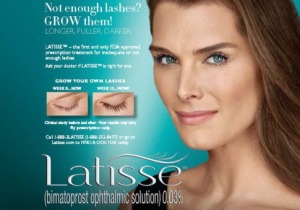 Forbes ran an interesting piece last month on the fine line in Big Pharma between promoting a new drug and presenting a misleading picture of its risk and benefits. In fact, the American Food & Drug Administration regularly singles out drug companies that use questionable language to imply or suggest their drug is superior to similar treatments, and watches closely for the omission of dangerous risk and side effect information. Forbes recently ran an online slide show of the 10 most misleading drug ads that have been slapped with FDA warning letters.

For example, actress Brooke Shields is a professional celebrity-for-hire (Volkswagen-Ford-Coppertone-LaZBoy-Colgate-Tupperware) and also spokeswoman for Latisse, a prescription eyelash thickening agent. Yes, there is such a thing. In September 2009, the FDA went after Latisse’s maker, Allergan, for a website that downplayed the drug’s serious risks which include cornea infections, hair growth outside of the treatment area, and permanent darkening of eye color.*

“It’s almost impossible for the public to actually parse the ads and come to their own independent conclusions.”

But Dr. Nissen is suspicious of most drugs that are advertised because he thinks that the marketing campaigns distract and mislead consumers. His advice: avoid the most heavily advertised drugs and stick to generics.  END_OF_DOCUMENT_TOKEN_TO_BE_REPLACED

Let’s say you are a heart attack survivor like me, who must now take a fistful of cardiac drugs every day.  And let’s say one of them is Crestor, a drug manufactured by the U.K – Sweden based pharmaceutical company, AstraZeneca. But today you learn that AstraZeneca plans to move all drug production of its “active pharmaceutical ingredients” from the U.K. to China.

Next, you find out that the world’s biggest drug company, Pfizer – manufacturer of both Norvasc (your calcium channel blocker drug) and Accuretic (your ACE inhibitor) – is doing the same thing.

Pfizer plans to close its Connecticut plant and expand operations in Wuhan, China, where hundreds of new jobs will be added.  Pfizer is also expanding in Shanghai.

The list gets longer. The drugmaker Novartis (creator of many ‘over the counter’ drugs like Maalox, ExLax, Buckley’s, Bufferin, as well as generic prescription drugs like amoxicillin and fentanyl) has just announced a $1 billion investment that will create China’s largest pharmaceutical plant. Eli Lilly (makers of many diabetes drugs, plus Cymbalta, Prozac, Cialis) has just axed 5,500 North American jobs, and is adding 2,000 jobs at its China plants. Contract drug sales rep firms are ramping up in China to serve these companies.

Outsourcing to China is part of a disturbing Big Pharma trend. Drug companies with massive Western operations are shutting them down and moving them to China to reduce costs. The question you should be asking now is: “How will our government regulators monitor drug safety if all the factories are in China?” END_OF_DOCUMENT_TOKEN_TO_BE_REPLACED