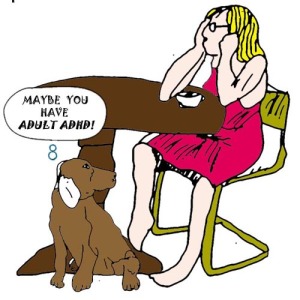 Martha suggests the following conditions that just might turn into potential blockbuster diseases – the ones that Big Pharma hopes you get this year:

1. Adult ADHD (Attention Deficit Hyperactivity Disorder) is a diagnosis that has doubled in women age 45 to 65, and tripled in men and women 20 to 44, according to the Wall Street Journal. A drug ad in Psychiatric News, for example shows a pretty but pouting young woman, saying: “I’m Depressed. Could it be ADHD?”

Big Pharma also has to convince kids who grew up diagnosed as ADHD not to quit taking their meds as adutls, says Mike Cola of Shire (which makes the ADHD drugs Intuniv, Adderall XR, Vyvanse, and the Daytrana patch).

“We know that we lose a significant number of patients in the late teen years, early 20s, as they fall out of the system based on the fact that they no longer go to a pediatrician.”

2.  Rheumatoid Arthritis is a serious and dangerous disease. Once upon a time, RA was diagnosed from the presence of “rheumatoid factor” and inflammation. But, thanks to Pharma’s supply-driven marketing, stiffness and pain may now be all that are required for the diagnosis today.

In addition to diagnostic wiggle room, RA has other blockbuster disease requirements. It  will “only get worse” if untreated, warns WebMD, (the health website whose financial ties with drug companies like Eli Lilly have been investigated by the U.S. Senate Finance Committee, by the way). Abbott’s Heather Mason told the Chicago Tribune that RA is often “misdiagnosed and under-reported people often don’t know what they have.” So serious a disease, it costs over $20,000 a year to treat with the drug Humira, but so subtle you may not know you have it?

3.  Fibromyalgia is another under-reported condition, characterized by widespread unexplained body pain. Fibromyalgia is “almost a textbook definition of an unmet medical need,” says Ian Read of Pfizer, which makes the first drug to be approved for fibromyalgia, the seizure pill Lyrica, which earns $3 billion a year in sales for Pfizer.

But Lyrica now has to fight off competition from  Cymbalta, the first antidepressant to be approved for fibromyalgia. Eli Lilly has pre-positioned Cymbalta for the physical “pain” of depression in a campaign called “Depression Hurts” before the fibromyalgia approval. Treatment of fibromyalgia with either Lyrica or Cymbalta can hover around $10,000.

And some patients take both drugs.

4. Middle of the Night Insomnia

Sleep disorders are a goldmine for Big Pharma because everyone sleeps – or watches TV when they can’t. To churn the insomnia market, drug companies roll out subcategories of insomnia, such as chronic, acute, transient, initial, delayed-onset, terminal, early-morning, menopausal, and the master category of non-restful sleep. Last fall, Big Pharma launched a new version of Ambien for “middle-of-the-night insomnia” called Intermezzo, even though Ambien is paradoxically notorious for middle-of-the-night awakenings: people “waking up” in an Ambien blackout and walking, talking, driving, making phone calls, and eating food.

People with insomnia won’t be bright-eyed and bushy-tailed the following day – whether they didn’t sleep or whether they have sleeping pill residues in their system. In fact, Big Pharma tells us that they are actually suffering from the under-recognized and under-reported epidemic of Excessive Daytime Sleepiness. The main medical causes of EDS or ES are sleep apnea and narcolepsy, but last year Big Pharma rolled out a lifestyle-caused “Shift Work Sleep Disorder.” which can, fortunately, be treated with Schedule IV stimulant drugs like Provigil and Nuvigi.

Of course, wakefulness agents contribute to insomnia, which contributes to wakefulness problems in a kind of perpetual pharmaceutical jet lag.

7.  Insomnia That Is Really Depression

Sleep disorders have also given a new lease on life to antidepressant drugs. Doctors now prescribe more antidepressants for insomnia than they do sleeping pills. They also often combine them, since, as the industry-friendly WebMD explains:

“Insomnia and depression often occur together, but which is the cause and which is the symptom is often unclear. Depressed patients with insomnia who were treated with both an antidepressant and a sleep medication fared better than those treated only with antidepressants.”

She concludes her Alternet piece by warning that many of the new blockbuster diseases from adult ADHD to fibromyalgia are treated with new drugs piled on top of existing ones that aren’t working, a Pharma contrivance called polypharmacy.

Dr. Gilbert Welch, along with his co-authors Drs. Lisa Schwartz and Steven Woloshin, wrote in the New York Times* a couple years ago that what’s actually making us sick is what they call “an epidemic of diagnoses”. For example:

“This epidemic is a threat to your health. It has two distinct sources.

“One is the medicalization of everyday life. Most of us experience physical or emotional sensations we don’t like, and in the past, this was considered a part of life.

“While these diagnoses may benefit the few with severe symptoms, one has to wonder about the effect on the many whose symptoms are mild, intermittent or transient.“