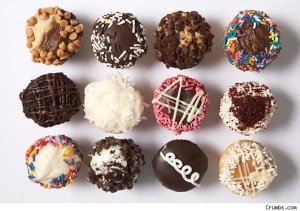 Cupcakes bring back memories of home baking dropped off for my kids’ fundraising bake sales at Willows Elementary School. I decorated with cream cheese icing and sparkly sprinkles guaranteed to catch a school kid’s eye – nothing fancy, but fun to eat – and who doesn’t love a cupcake? But cupcakes have really grown up lately.

Consider those baked by the largest cupcake company in the world. It’s called Crumbs, owned by Jason and Mia Bauer of New York City, who report that their 7-year old company racked up $23.5 million in revenue last year. And that’s just selling cupcakes!

Donna Fenn, author of the book Upstarts! How Gen Y Entrepreneurs are Rocking the World of Business, recently interviewed Jason Bauer for BNet. He offered these three secrets for the success of Crumbs:

1.  Listen to your customers. When the Bauers opened their first bakery, on the Upper West Side in Manhattan, the line was out the door on the first day. Bauer said:

“We carried 150 items. And we started with two to three varieties of cupcakes. They included Mia’s signature coconut cupcake, which she had first made in the second grade. No matter how many other items were in the bakery, we noticed that customers were clearly cupcake-crazed, since the cupcakes would sell out every day.  So Mia experimented with more varieties until our shop carried twelve different kinds of cupcakes with various fillings and toppings. A few months into the operation, we decided to convert the bakery case into all cupcakes. Mia went on a rampage, and we started to be known as a cupcake place. That wasn’t in the original plan, but a willingness to respond to market demands helped drive this initial success.”

2.  Take calculated risks.  Six months after their launch, the Bauers opened a second bakery across town on the Upper East Side, and experienced similar success. In 2004, they took a leap of faith and opened a third store in highly commercial mid-town Manhattan. The two original stores were in residential neighborhoods, where families with children could be counted upon for repeat business. But, as it turns out, the cupcake craze was widespread. Bauer explained:

Crumbs landed a significant amount of catering work from companies who figured that boring meetings could be made a lot more palatable with, say, a big box of red velvet cupcakes.  When the recession hit, the corporate catering work dried up a bit, but Bauer says that foot traffic increased because “everyone can afford a $3-$4 cupcake.”

3.  Get the right people on the bus. For the Bauers, that started with each other.  They were dating when they decided to start a business together in 2003, and recalls Bauer, “people thought we were crazy, but we knew we worked well together.”  One marriage license, 35 stores, and two kids later, it looks like they were spot on. The Bauers are also big believers in home grown talent. “A lot of people on our corporate staff started as counter help,” says Bauer.  Ditto for store managers. Training existing employees to be managers and leaders ultimately saves time and money, and sends new employees the message that the company is invested in their success. Crumbs now has over 400 employees, half of whom are full time, and 35 stores in four states, with stores in Chicago and Washington, DC opening soon.

For his part, Bauer thinks that Crumbs’s success is pretty simple.

“It’s all about the cupcakes.”

Read the BNet interview or visit the Crumbs website – which also does a booming business in online orders.

Want to try your hand at baking cupcakes? Here are some amazingly healthy recipes courtesy of National Public Radio.

5 thoughts on “How a New York bakery sold $23.5 million worth of cupcakes last year”