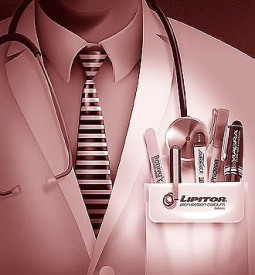 For many years, pharmaceutical companies have supplied free lunches – and even fridges to store them in – in the student lounges of Canadian medical schools. Well, if the association that represents Canada’s medical schools has anything to say about it, there really will be no such thing as a free lunch – at least for medical students. This also means no more talks given by physician experts paid by pharmaceutical companies. No more unsupervised meetings with drug reps.

Recently, several other university medical centres such as Yale University have also barred drug company sales reps from bringing free lunches to staff physicians. (Yale might have been motivated to do so by the recent ‘C’ grade it recently received from the American Medical Student Association, a national group that rates how well medical schools monitor and control drug industry money).

And in September, Stanford University (which rated a ‘B’ grade) announced that its physicians will no longer be able to accept gifts of any size from any type of vendor, including drug companies and medical device makers. Ethicist Dr. Richard Popp at Stanford’s biodesign program explained:

“It’s a slippery slope from pens and Post-Its to bigger gifts. It is more clear cut just to say don’t take anything.'”    END_OF_DOCUMENT_TOKEN_TO_BE_REPLACED