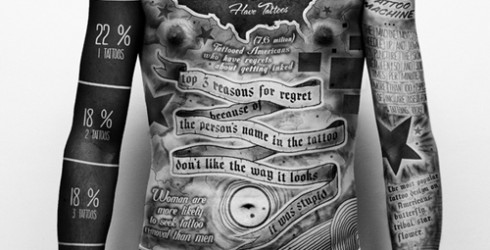 Jonathan Harris, despite his role as one of the pioneer creators of the modern infographic, takes aim at those ubiquitous splashy charts and graphs that take a pile of stats, facts and percentages and morph them into poster-like images, for better or worse:

“Culture’s interest in data is becoming incredibly obsessive and almost pornographic with the rise of infographics.”

“A similar thing is true with data and a huge percentage of the data art now in infographics is boring.”

An effective infographic basically conveys a significant chunk of information in a visual way. As one scribe opined, infographics came to be because a plain block of text is often too lengthy, too excruciatingly boring and without any visual appeal. But when infographics evolved, they boasted  “visual impact”, “engagement of the passing eye” and “comfortably masticated chunks” of information.

As I wrote here, the poster boy (they’re mostly boys) for Quantified Selfers is arguably one Stephen Wolfram, who famously published his eye-popping data collection analysis of, among many other things, how many individual keystrokes he’s made on his computer over the past 20 years.  My first reaction when I heard this was that I simply cannot even imagine having to sit next to Mr. Wolfram at a dinner party, for fear that, at any moment, he might actually start talking to me about his personal keystroke data analysis.

I think we might agree that not even a flashy infographic could translate 20 years worth of computer keystrokes into anything that most people  would be even remotely interested in looking at.

It’s a common misconception that information equals data. Effective information sharing is not simply a series of data points, but a creation of images, colour, and words. At the end of the day, an infographic is content dressed up in its shiniest Sunday shoes to attract our attention – far more than just a plain page of numbers ever would.

But infographics are also first and foremost a way to get public attention, enhance marketing brands, encourage links, and drive viral social media traffic to the website of whoever launches the infographic.

And even the shiniest pair of shoes won’t work for us if they aren’t what we want or need.

Infographics, or big information graphics, have of course been around forever in the form of maps and signs. The first to call itself a modern infographic is likely the iconic 2003 map of the world showing global locations of Starbucks and McDonald’s venues, created by one Jonathan Harris himself.

As the popularity of infographics began to grow since 2003, the quality and novelty seen in the early forms plummeted in the hands of amateur designer wannabes.

To help explain this decline, I recommend Think Brilliant’s clever infographic about infographics that targets the concept’s most common and egregious design flaws.

But when anybody who can cut and paste a bar chart feels entitled to call their work an infographic meant purely to clog up your Twitter feed, it may be that the end is deservedly near for the art form.

3 thoughts on “Infographics: have we gone too far?”