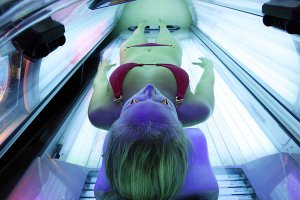 A doctor in a white lab coat stands at the pearly gates. The voice of God booms: “And your good deeds?” The man responds: “Well, as a dermatologist, I’ve been warning people that sunlight will kill them and that it’s as deadly as smoking.”

His smug smile fades as God snaps: “You’re saying that sunlight, which I created to keep you alive, give you vitamin D and make you feel good, is deadly? And the millions of dollars you received from chemical sunscreen companies had nothing to do with your blasphemy?”

A bottle of SPF 1000 sunscreen materializes in the dermatologist’s hand. “You’ll need that where you’re going,” God says.

So starts a compelling post about the tanning salon industry written by Bridget Huber, a staff writer at FairWarning, an online, non-profit publication that covers health, safety and corporate conduct. During a subsequent interview with Reporting on Health, she explained:

“To be perfectly honest, I was skeptical that there was much of a story here. But as I started to spend some time reading trade magazines, I realized the tanning salon industry was doing and saying some pretty extreme and misleading things that appeared to be flying under the radar.”

The scene above, she explains, is part of a training video for tanning salon employees made by an industry group called the International Smart Tan Network. The tone is tongue-in-cheek, but it’s part of a defiant campaign to defend the $4.9 billion industry against mounting evidence of its questionable business practices – and the harm caused by tanning.

And, in an extraordinary touch, writes Huber, it is portraying doctors and other health authorities as the true villains — trying to counter a broad consensus among medical authorities that tanning bed use increases the risk of skin cancers including melanoma, the most lethal form.

“To sway public opinion, the industry has also gone on the offensive using tactics that appear cribbed from Big Tobacco’s playbook to undermine scientific research and fund advocacy groups that serve the industry’s interests.

“At the heart of the industry’s message is the idea that tanning critics such as dermatologists, sunscreen manufacturers and even charities like the American Cancer Society are part of a profit-driven conspiracy. These critics are described as a ‘Sun Scare industry’ that aims to frighten the public into avoiding all exposure to UV light. The tanning industry blames this group for causing what it calls a ‘deadly epidemic’ of vitamin D deficiency, and tries to position itself as a more trustworthy source of information on tanning’s health effects.”

Researcher Dr. Jody A. Levine is a pediatrician and senior dermatology resident at SUNY Downstate Medical Center in Brooklyn, N.Y. She told WebMD:

“We know that ultraviolet radiation is a carcinogen just like tobacco. Radiation use has been declared a carcinogen by the National Institutes of Health. And the World Health Organization recognizes that no person under 18 should use a sunbed.

“But successful lobbying by the multi-billion dollar tanning industry stifles effective safety regulations. Despite continual evidence that indoor tanning is harmful to our health, it has been difficult to pass regulations.”

Dr. Levine and her colleagues conclude that indoor tanning is a dangerous practice – especially for teens, citing a 1994 study of Minnesota teens that showed skin injuries in 59% of tanning bed users:

“The fast growth of cells during the teen years makes teens especially susceptible to the cancer-causing effects of radiation. And UVA and UVB radiation comes from both sunlight and indoor tanning devices. The American Academy of Dermatology and the American Medical Association have called for a ban on the sale and use of tanning equipment for non-medical purposes. And both the FDA and the Center for Disease Control  each encourage people to avoid the use of tanning beds and sun lamps.”

Dr. Levine adds that the indoor tanning industry promotes a dangerous myth: that getting a “base tan” or a “pre-vacation tan” will protect you from planned sun exposure.  I have to admit that it’s a theory that has made sense to me, too, especially during the weeks before heading off for family holidays in Hawaii or other sunny destinations.

But Dr. Levine considers my past actions a “particularly dangerous practice”, because it actually multiplies the amount of radiation a person gets from sun exposure:

“People think this base tan will help protect them from the sun’s damaging rays, which is completely false. Tanning under the sun gives protection equal to only suntan lotion of SPF 3 – and sunbed tanning gives even less protection than natural sun tan.

“The risk is not just the double hit of radiation. After getting a base tan, people are even more likely to go out in the sun without sunscreen under the false pretense of being protected.”

Melissa Haynes is a spokeswoman for the Indoor Tanning Association. The ITA is an industry trade group representing tanning bed salons, manufacturers, and distributors as well as makers of spray-on tanning products. She told WebMD:

“Tanning salons tan people safely because they warn clients about getting sunburns.

“One of the things we take very seriously is to educate people never, ever, under any circumstances, to get burned. That is just dumb. And it hurts a lot.”

And speaking of dumb, the ITA actually ran a national ad campaign that was  launched with full-page ads in publications like The New York Times in order to counter experts who blame ultraviolet rays from the sun and tanning salons for causing melanoma.

Sarah Longwell, another representative of the Association, said in a Good Morning America interview:

“The dermatologists, the sunscreen and cosmetic industries have tried to say that somehow moderate tanning causes melanoma, which is just not true.”

In fact, Longwell claimed that the studies warning against prolonged tanning in the sun or use of indoor tanning beds have relied on “junk science.”

But that’s not quite the science reported in The Globe and Mail when it ran a series of industry claims balanced by these Health Canada responses:

Claim: Sun exposure, in moderation, is safe for many people, such as people who don’t have fair skin and red hair, according to the Joint Canadian Tanning Association, an industry group.

Response: Health Canada has created information on its website for consumers about safety of tanning lights which says:

“There is no safe way to tan. A tan from the sun’s rays or under lights in a tanning salon will damage your skin.”

Claim: There is “no research” that links moderate, non-sunburn-related sun exposure, to increased risk of cancer or other problems, according to a press release issued by the Joint Canadian Tanning Association in response to the WHO report.

Response: The International Agency for Research on Cancer reviewed about 20 scientific studies and found the risk of skin cancer jumps when people start using tanning beds before age 30. New research has emerged in recent years that shows risks can increase even when a person doesn’t experience a sunburn, according to Heather Chappell, acting director of cancer control policy at the Canadian Cancer Society.

Claim: Tanning beds can help Canadians produce adequate levels of vitamin D, which has been found to decrease risks for certain types of cancer, particularly in winter months when there is little sun exposure.

Response: Tanning beds are a source of some ultraviolet B radiation, which can help the body produce vitamin D. But they have also been found to emit five times the ultraviolet A rays as the sun does during peak times, according to information about tanning safety compiled by Health Canada. The bottom line, according to Ms. Chappell at the Cancer Society, is that there are “much safer alternatives” for getting vitamin D. The society recommends getting a few minutes of sun exposure when the sun isn’t at its peak (between 11 a.m. and 4 p.m.) and taking supplements during winter months.

Q: Which side are you on?  Are tanning beds safe or unsafe?