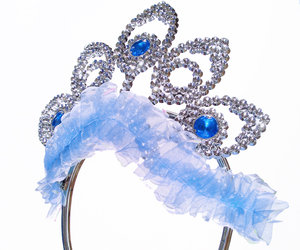 I have an adorable little 5-year old in my life who has spent Fridays with me since she was a newborn. She calls me Baba, Ukrainian for grandmother. Her real grandmother is my friend, Gail, who has graciously let me share her granddaughter (and her 3-year old grandson!) And because my grown kidlets are slow in producing grandchildren for me, these two are ideal targets of my grandmotherly love.

Lately, my 5-year old has developed a compelling interest in what I call ‘princess stuff’. Other than some Disney storybooks, her daily exposure to princess marketing is restricted; her family home has no television. Yet my admittedly limited observations of her and her little friends tell me that she’s not alone; most very small girls are ga-ga-girly over All Things Princess.

Orenstein, a New York Times writer, documents her struggle as a parent: how to raise a daughter who is happy and self-confident amid a world that encourages little girls to engulf their rooms in pink chiffon and rhinestone tiaras. She’s talking about The Princess Complex – the little-girl love affair that starts with Cinderella and ends with sheets and toothbrushes and cups and tiaras and home décor and pint-size wedding gowns and myriad other products.

And the ultra-feminine messages that come along with The Princess Complex, notably:

“Some day my prince will come!”

Just think about the fairy tales themselves, as listed in the Newsweek piece called Disney Princesses and The Battle For Your Daughter’s Soul recently:

“Cinderella, Sleeping Beauty, Snow White – all pitted against evil, ugly old women (read: age = awfulness), waiting for the prince they’ve never met to fall for their beauty (not smarts) and rescue them from misery.

“In The Little Mermaid, Ariel literally trades in her voice for the chance a man she’s never met will love her in return.”

According to Orenstein, the Disney Princess products did not even exist before 1999. But with the following 10 years, sales of Princess items in North America surpassed $4 billion — “the largest franchise on the planet for girls ages two to six.” Disney alone has 26,000 Disney princess items on the market today.

Orenstein interviews a Disney exec who suggests that Disney princess props “allow girls to expand their imaginations.” But instead, Orenstein finds that during a drawing exercise at her own daughter’s preschool, boys imagined themselves as everything from animals to insects, snack foods to superheroes, while girls were uniformly princesses, fairies, butterflies, or ballerinas.

As author Barbara Ehrenreich observes in the Huffington Post:

“Disney likes to think of the Princesses as role models, but what a sorry bunch of wusses they are.

“Typically, they spend much of their time in captivity or a coma, waking up only when a Prince comes along and kisses them. The most striking exception is Mulan, who dresses as a boy to fight in the army, but — like the other Princess of color, Pocahontas – she lacks full Princess status and does not warrant a line of tiaras and gowns. Otherwise the Princesses have no ambitions and no marketable skills, although both Snow White and Cinderella are good at housecleaning.

“And what could they aspire to, beyond landing a Prince? In Princessland, the only career ladder leads from baby-faced adolescence to a position as an evil enchantress, stepmother or witch.

Orenstein’s book deconstructs how marketing precedes and shapes adult beliefs about our children.

“For instance, the association of the colour pink with girlish innocence is relatively recent; when nursery colours were introduced about a century ago, pink was actually the more masculine hue.”

One of the easiest ways to pump up merchandise sales, she explains, is “to magnify gender differences — or invent them” – so parents now have to buy a pink cup for Emma, a blue one for Max.

One of Cinderella‘s many compelling observations is that the childhood phases we now take for granted – toddler, tween – were established by marketers, and NOT by doctors or child specialists.

Consider that demographic term “tween” (girls between middle childhood and adolescence, usually 8-12 years of age). It only came to be understood as a distinct psychological and physical phase of development after being invented in the mid-’80s by marketers seeking to boost consumption. Orenstein’s book reveals how well it works:  tween girls now spend more than $40 million every single month on beauty products.

The problem, she writes, is that, increasingly, a girl’s sense of being a girl is defined by possessions, not character, so “narcissism and materialism” may become inextricably connected to her sense of feminine identity. Or, to put it another way, she adds:

“Rather than raising a generation of Cinderellas, we may actually be cultivating a legion of stepsisters.”

8 thoughts on “Selling Cinderella to our daughters”