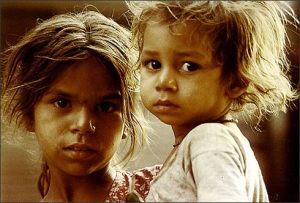 In New Delhi, 49 babies died at the All India Institute of Medical Sciences (a public hospital renowned for providing low-cost treatment to the poor) while they were taking part in pharmaceutical clinical trials over a 30-month period. These babies had been given a variety of new drugs being studied to treat conditions like zinc deficiency, high blood pressure or a brain inflammation called chronic focal encephalitis. The head of the pediatrics department at the All India Institute claimed that “none of the deaths was due to the medication or interventions used in clinical trials.”

The blood-pressure drugs had never before been given to anyone under 18. Yet of the children enrolled in these studies, two-thirds of them were infants less than one year old.

Rahul Verma, of the Uday Foundation for Congenital Defects and Rare Blood Groups (which exposed the babies’ deaths after a request under India’s freedom of information laws) observed:

“If you are rich in this country, you go to a private doctor. You certainly don’t put your child up to be experimented on.”

The editor of an Indian medical journal said at the time that it was obvious that the trials were intended to extend life in Western countries “with no consequence or benefit for India, using Indian children as guinea pigs.”

India has become one of the leading destination for international pharmaceutical companies to outsource clinical trials, largely because of the low cost of doing business there. According to the Times of India, the cost to Big Pharma of conducting drug trials in India is only 20% to 60% of the cost in industrialized countries.

And an executive at a contract-research organization told the anthropologist Adriana Petryna, author of the book When Experiments Travel:

“In Russia, a doctor earns two hundred dollars a month, and he is going to make five thousand dollars per patient that he signs up for each drug study.”

Investigative journalists Donald Barlett and James Steele uncovered more on this growing practice of drug companies heading overseas to conduct clinical trials for their report in the January issue of Vanity Fair. They wrote:

“The only people who seem to care about the surge of clinical trials in foreign countries are the medical ethicists—not historically a powerhouse when it comes to battling the drug companies.

They quote a team of physician-researchers from Duke University, writing last year in The New England Journal of Medicine, who observed:

“This phenomenon raises important questions about the economics and ethics of clinical research and the translation of trial results to clinical practice:

“In some places, financial compensation for research participation may exceed participants’ annual wages, and participation in a clinical trial may provide the only access to care for those taking part in the trial.”

The Barlett-Steele report is unflinching in its take on what they call “the globalization of the pharmaceutical industry, and our failure to rein in a lethal profit machine.”

Aside from the India babies scandal, they also remind us that in 2007, residents of a homeless shelter in Grudziadz, Poland received as little as $2 each to take part in a drug company’s flu-vaccine experiment, thinking they were just getting a regular flu shot. They were not. At least 20 of them died.

They add that most Big Pharma clinical trials done today are conducted overseas “on sick Russians, homeless Poles, and slum-dwelling Chinese – in places where regulation is virtually nonexistent, the FDA doesn’t reach, and ‘mistakes’ can end up in pauper’s graves.”

For example, rates of international enrollment in trials were highest in coronary artery disease trials (over 50%), followed by high-risk trials, and trials testing acute interventions such as for myocardial infarction (heart attack), according to Dr. Esther S.H. Kim and her colleagues from the world-famous Cleveland Clinic.

Of 24 cardiac studies that researchers investigated, 19 trials with more than 151,000 patients had international participation, according to their study published online in the Journal of the American College of Cardiology.  Eleven of those 19 trials focused on coronary artery disease (CAD). One CAD trial sponsored by the National Institutes of Health consisted of 100% international participation, with three others enrolling more than half overseas participants at 95.5%, 80%, and 77.5% respectively. Researchers wrote:

“The wide heterogeneity in the enrollment of international patients in large cardiovascular randomized clinical trials does not appear to be a fleeting trend.”

Until recently, most research to test the efficacy and safety of the medications North Americans take has traditionally been done mostly by academic researchers in North American universities and teaching hospitals, a system that included certain minimum standards.

Barlett and Steele offer this list of reasons that moving clinical trials overseas is so appealing to drug companies:

Read more about this disturbing trend, or watch this report from Aljazeera.

See also: Do You Want to Take Medications Made in China?