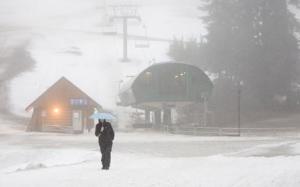 Don’t you love a good David-and-Goliath story?  Here’s one about a little bitty iPhone app that has forced mega-ski resorts to alter their public updates on snow conditions. For the sake of clarity, I’ll call this: ‘Telling The Truth For A Change”.  But first, let’s look at a very recent example of this issue at work. There’s a secret that the organizers of the 2010 Olympic and Paralympic Winter Games in Vancouver do not want you to know: it rains a lot here on the balmy West Coast of Canada all winter.

In fact, World Cup ski events are no longer held here because of the frequency of warm weather cancellations.

And recent winter rains have forced Cypress Mountain to close this week.  Cypress is home to Olympic aerial and mogul skiing and to snowboarding, snow-cross and ski-cross events.

While the people who actually live here have far more important things to worry about next month (like 2,000 elective surgeries being cancelled in Vancouver because of the Games, or the homeless being tidily swept off the streets so the world’s media will not notice them, or 800 of our province’s teachers losing their jobs because, although there is plenty of government money for the Games, there’s not enough for education), Vancouver’s Olympic organizers may also be a wee bit worried about their snow venues just weeks before the games start.  It’s really a dreadful problem compared to cancelled surgeries or the homeless issue or fired teachers.

But these organizers now insist they’ve got enough snow stockpiled to run Olympic events at Cypress when the Olympic games happen from February 12-28, 2010. Tim Gayda, the 2010 games’ vice-president of sport, explained:

“When we saw this warming trend, we worked with the mountain to look at all the places where there was natural snow and we started to stockpile it. When you push it into these big piles, it insulates it a lot better. There’s thousands of cubic metres of snow in each pile.”

So “Don’t worry, be happy” is once again the reassuring update from the slopes.  It turns out, however, that reassurances of excellent ski conditions are actually a common marketing practice in the ski industry – whether they are true or not. Good conditions lure skiers to the hill.  Poor conditions scare them off.  Ski resorts have for years pulled a subtle snow job on the recreational skier/snowboarder, routinely inflating reports of how much new snow has fallen in order to lure the lucrative weekend crowd, according to a new study called Wintertime for Deceptive Advertising reported by national correspondent David Ebner in The Globe and Mail last week.

The misinformation, suspected for years by skiers, is revealed in this study by two ski-loving economics professors from Dartmouth College.  A couple winters ago, the lure of an advertised six inches of new powder at a resort in Vermont’s Green Mountains led economist Dr. Eric Zitzewitz and his colleague Dr. Jonathan Zinman to skip work at Dartmouth for the day to indulge in a skier’s greatest love: fresh tracks.  But when the profs got up to the hill, the six inches of powder was “actually more like two!” Dr. Zitzewitz told Ebner.

Does this sound familiar? It’s no surprise for those of us who have ever arrived at the mountain expecting to find fabulous conditions as advertised, only to see an alarming amount of bare rock sticking out of wet slush, along with the prospect of an expensive wet weekend spent indoors buying drinks in the pub waiting for new snow to fall.

For their study, the two professors collected past and current data from the past five seasons at 450 ski areas in Canada and the United States, and weighed the numbers against independent weather data.  It showed an obvious weekend effect in the ski industry’s own snow reports.

Ski areas, in general, were juicing the snow numbers by an average of 23% for Saturdays and Sundays, the Dartmouth study discovered.

But something interesting happened during the final season of the five-year study, reports Ebner.

“During the final season of the study, 2008-2009, ski report.com  added a feature to its popular iPhone app that let skiers opine live from the mountain. The professors found that dispatches such as this one – “Jackson Hole DID NOT get 15” today … more like 0” – had an instant impact on the ski industry.

“The weekend effect drops to zero where the iPhone is heavily used,” said Eric Zitzewitz at Dartmouth. “Consumers are getting armed with ever-more data. There’s a deeper message, it goes beyond just skiing. When it’s easier for consumers to share firsthand accounts from the slopes and lifts, all of a sudden we don’t see the exaggeration.”

The Whistler-Blackcomb ski resort, another Olympic venue in 2010, is known for its spectacular scenery and world-class runs, but also for wet snow and rain. Here’s a sampling of local unofficial on-site snow conditions filed online at The Whistler Report:

“It looks pretty grim out there. We had a warm rainy front come through here and wet snow is falling in the alpine again.”    November 25/09

“It’s pretty disgusting up there, people. Rain almost top to bottom. The ‘snow’ that fell in the Alpine was heavy as molasses. The best riding is at lower altitudes where the snow is nice and slushy.”    January 9/10

‘Grim’?    ‘West coast concrete’?    ‘Disgusting’?  Not the conditions you’d want to broadcast if you were about to host the Winter Olympics.

“Wall Street financiers say they are going to put the Whistler Blackcomb ski resort up for sale while the facility is hosting Winter Olympic events next month. Creditors who have loaned $1.4 billion US to the ski resort’s owners, Intrawest ULC, have effectively seized control of the company and are attempting to auction off its assets.”

*For the benefit of American snow fans, here’s The Whistler Report’s translation of metric measurements here in Canada:

There is still one nation left in this world where the Fahrenheit scale is used to measure temperature. You know who you are. Here is a quick Celsius refresher. Water freezes at O Celsius, therefore anything between -1c and -10c is good for snow while still comfortable for people. For aprés-ski in Whistler village, people will sit outside on the patios at about 5c.

Read David Ebner’s original article in The Globe and Mail.