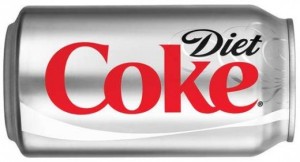 I believe it was British actor/author Joan Collins who once said that she doesn’t drink diet soda “because you never see skinny people drinking it!”  Think about that truism for a moment.  Ever since I read that, I’ve undertaken my own small and non-scientific observational study of my own, and I have to say that Joan may be on to something. Lots of people, however, are indeed drinking the stuff, both fat and skinny alike: Diet Coke is now the #2 top-selling soft drink in the world by volume, second only to regular Coke, and – surprisingly! – ahead of regular Pepsi (formerly in #2 place worldwide). The Guardian’s Katie Baker once referred to Diet Coke as “the world’s liquid crack of choice”.

“Pepsi blinked. Its flagship, the perennial #2 to brand Coke, dropped to the #3 slot as it was surpassed by Diet Coke. As a result, for the first time in two decades, PepsiCo ceded the soft-drink category’s two leading share positions to its legendary rival.”

This historic shift, as Ad Age called it, was a phenomenon in the world of diet soda marketing.

“Finally, at 30 years old, Diet Coke’s wish has come true – people are drinking it just for the taste, as 40% of colas sold are now either Diet Coke or Coke Zero.”

She also attributes the brand’s phenomenal growth to these two “genius moves“:

It doesn’t hurt that Coca-Cola’s advertising for both Coke and Diet Coke is handled by Portland’s Wieden & Kennedy, the ad agency responsible for marketing other iconic brands from Nike to Procter & Gamble.

The number of North American children now consuming diet soft drinks has doubled in just the past decade. In 1998, only 6% of kids drank diet cola, but by 2008, that percentage rose to 12.5. About 25% of adults now consume diet beverages like Diet Coke.

Diet Coke made its marketing debut back in 1982, the fitness-crazy year that Jane Fonda released her first workout video. A New York Times article declared:

“Hollywood has a new ‘in’ drink. At cocktail parties and premieres, Perrier has given way to Diet Coke as the drink of choice.”

Some of Diet Coke’s flavours failed, like Diet Coke with Lemon, which some consumers criticized for tasting vaguely like Lemon Pledge furniture polish. It was, mercifully, phased out in 2005.

Others have been intensely popular, like Diet Coke with Lime (I have to say, my own personal favourite).

The only problem with the whole “diet” name is that, from a marketing perspective, it locks the drink pretty firmly to one gender. Enter Coke Zero – introduced in 2005 in its distinctive black – and unisex – label. It’s also sweetened with a blend of low-calorie sweeteners instead of Diet Coke’s aspartame. It has found a strong target market so far, and has not seemed to cannibalize Diet Coke sales.

There have been rumblings that people who drink a lot of diet soda (not Diet Coke in particular) have paradoxically larger waist circumferences, but these studies suggest association, not causation. None so far prove cause and effect. See Joan Collins’ quote.

However, there are other health scares which, if true, would be much more troubling. Aspartame, the magic ingredient in Diet Coke and most other diet soft drinks that makes them taste sweet, has been investigated as a possible cause of cancer, diabetes, heart disease, fertility problems and many other things that ail you, but at the moment there are few if any definitive results.

Dr. Steven Novella writing in Science-Based Medicine, for example, cites a published review of all available evidence, including hundreds of aspartame studies, which concluded (as did multiple reviews going back to 1985):*

“The studies provide no evidence to support an association between aspartame and cancer in any tissue. The weight of existing evidence is that aspartame is safe at current levels of consumption as a non-nutritive sweetener.

“There is no pattern of evidence to suggest that aspartame causes cancer, autoimmune disease, neurological disease, diabetes, or anything else its critics claim.

“A conspiracy to hide the risks of aspartame, however, remains a popular internet urban legend that will likely not disappear anytime soon.”

There are, however, some general recommendations from those who are charged with monitoring public health: you shouldn’t drink more than 18 cans of aspartame-containing drink a day, warned one such agency.

But let’s face it, if you’re drinking 18 cans of anything every day, you have far bigger problems in life than what that aspartame may or may not be doing to your body.

“In the absence of any damning evidence, Diet Coke now occupies that twilight zone – along with dairy, wheat and Snack-a-Jacks.

“There’s nothing actively wrong with them, but if you feel your body is a temple, you won’t let them in it.”

* Magnuson BA, “Aspartame: a safety evaluation based on current use levels, regulations, and toxicological and epidemiological studies.”  Critical Reviews in Toxicology. 2007;37(8):629-727.

Q: Are you a Diet Coke drinker? Why or why not?

13 thoughts on “Diet Coke: the “world’s liquid crack of choice””