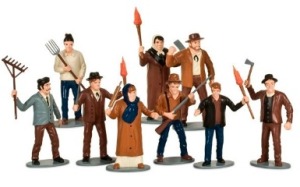 You Are Not So Smart is a fascinating blog “devoted to self-delusion and irrational thinking”. Launched by its resident brainiac David McRaney (who is also the author of a book by the same name), YANSS reminds us that, no matter how smart we may like to believe we are, the intriguing reality is likely that “we have no idea why we act or think the way we do.”

And what McRaney wrote recently about mob behaviour helped to make some  sense out of something that until now has made absolutely none to me: the moronic behaviour of the thugs who burned, looted and trashed the beautiful streets of downtown Montreal in 2012, and Vancouver in 2011.

These mobs illustrates the subject of deindividuation, a mouthful of a word that social psychologists use when an anonymous member of a mob is more likely to act violently than a known and identified individual.

“Your identity can spring a leak in the presence of others, and the more others there are, the more you dissolve into the collective will of the group.

“Looting, rioting, lynchings, beatings, war, chasing a monster with torches – the switch is always there, and it doesn’t take much to flip it.”

When a crowd gathers near a suicidal jumper, for example, something terrible is unleashed.

In Seattle in 2001, a 26-year-old woman decided to leap to her death from a bridge after ending a romantic relationship. As motorists began to back up on the bridge because of this incident, they started yelling: “Jump, bitch, jump!”  – until she did.

McRaney adds that police and firefighters are well aware of this tendency for crowds to gather and taunt, and this is why they tape off potential suicide scenes and get the crowd out of shouting distance.

“The risk of a spontaneous cheering section goading a person into killing themselves is high when people in a group feel anonymous and are annoyed or angry. It only takes one person to get the crowd going.

“Those are the three ingredients – anonymity, group size and arousal. If you lose your sense of self, feel the power of a crowd and then get slammed by a powerful cue from the environment – your individuality may evaporate.

Dr. Gordon Russell is the author of the book, Aggression in the Sports World. He has studied rioting hooligans, particularly those involved in European football riots.  His research* on sports-related violence in Finland, U.S. and Canada has identified a number of sociological categories of fans and their potential reaction to violence at or following a sporting event:

But in the case of the Vancouver rioters on June 15, 2011, a number had apparently been able to afford high-priced game tickets to the seventh game of the NHL’s Stanley Cup hockey playoff finals that night, widely considered by most Vancouverites as “the most important game in the team’s 40-year history.”  Vancouver ticket brokers at ShowTime Tickets told CBC News that fans were “looking at $1,900 to get into the game”.

And even among those who hadn’t attended the game in person but were part of the 155,000+ fans watching on giant screens in the designated outdoor Fan Zone downtown, many of the rioters we watched, horrified, on our TV screens, were wearing $200 Vancouver Canucks hockey jerseys while their home team lost that game to the visiting Boston Bruins.

Indeed, a number of the high-profile rioters who later turned themselves into police (after incriminating photos of themselves ‘at work’ during the riots were posted on social media) came from backgrounds of affluence, private school and privilege – certainly not poor young males with “disaffected attitudes and low-paying jobs”.

Dr. Russell suggests that certain personality profiles may also have predisposed many to riot. He predicts that the personalities of the Vancouver rioters likely include three main traits:

David McRaney also suggests that, within a crowd like those who gather around a suicidal jumper, many people do in fact retain their sense of right and wrong. For example:

“Some are able to maintain their composure. Many who witnessed these events felt terrible about what happened and condemned those who encouraged the jumpers, going so far as to condemn humanity itself after seeing such a dark display.

“What they didn’t realize, and what the people yelling didn’t anticipate, was the predictability and regularity of the behavior.”

This is going to be hard to believe, he says, but this sort of behavior could be inside you as well. Under the right circumstances, you too might yell “Jump!”

“The more anonymity a user is allowed, the more powerful the effect of being protected by the group. The tone and tenor of the conversations therein and the meatspace ramications of their collective efforts will reflect the cues provided by the website.”

Meanwhile, a recent editorial in the Montreal Gazette suggested that the collective attitude of Quebec university students participating in ongoing protests over proposed tuition hikes is merely a manifestation of the so-called enfant-roi (or tyrant child) syndrome throughout the province. For example:

“The rulers in Quebec boomer families are actually the cosseted children, who are conditioned to believe they can get anything they want from their adoringly pliant parents simply by throwing an almighty tantrum.

“The extension of this syndrome is the assumption by the minority of Quebec students participating in the boycott of classes that they can command the provincial government to rescind the tuition increase.”

So, as I followed on my TV screen the mob violence in Montreal and in Vancouver, and then pronounced:

“People who riot, burn and loot are thugs who are just looking for an excuse to be violent!”

– McRaney warns that this belief is a misconception, and the truth instead may well be:

“You too are prone to losing your individuality and becoming absorbed into a ‘hivemind’ under the right conditions.”

He cites a fascinating 2007 Halloween study in which 27 homes in a nice neighbourhood of Seattle were essentially turned into makeshift laboratories as part of a controlled study of the human mind.

“The researchers wanted to see if the anonymity of Halloween costumes would affect the behavior of children as they gallivanted from secret lab to secret lab.”

Children trick-or-treating without an adult companion were told they could have only one piece of candy at each participating home just before the “host” at each front door walked back into the house, leaving the children to choose their candy. Half of the time, the woman at the door asked the children to say their names and where they lived before leaving them alone at the door. Researchers wondered:

If they had to say their names and were also alone, fewer than 10% of children cheated by taking more than one piece of candy as instructed. In a group, about 20% of those who revealed their identity went on to disobey the host.

The study’s results showed that the power of anonymity was magnified in the presence of others.

“The kids who felt most anonymous and the most protected by the shared anonymity of the group were also the most likely to break the rules.

“With anonymity set to maximum, many kids tried to take all the candy they could.”

He describes this study as one of many suggesting that your identity can indeed “spring a leak in the presence of others” – the real life definition of deindividuation.

4 thoughts on “The mob mentality revisited”