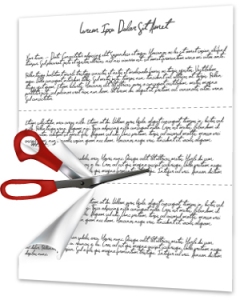 I’ve always been aware that the average Ethical Nag post here runs far longer than your average blog poster might choose to write.  Isn’t there, after all, some rule out there advising that a couple snappy paragraphs are best for the short attention span of blog readers? Are my readers being turned off because they lack the time or luxury to absorb 1,500 words of my deathless prose?

I generally approach writing for The Nag much like I did when I was writing magazine pieces. Start with the main theme, some solid background, some pithy quotable quotes from appropriate sources, reactions from The Culprits being examined, and finally my own two cents worth on the subject. (I can do that. Because it’s my blog).

But are my articles too long, I sometimes wonder, and thus turning off the average busy, over-tasked reader out there?  And what works best on the web: short or long-form journalism?

That’s the very question pondered by veteran journalist Lewis DVorkin, whose name will be familiar to readers of Forbes, The New York Times, Newsweek or The Wall Street Journal.  He describes his own uneasy transition from traditional print journalism over to online writing more than a decade ago:

“My traditional media colleagues ribbed me for abandoning ‘real’ reporting in favor of the fast and the short. No one reads in-depth stories online, they said.”

But his recent piece called Inside Forbes: The Inspiring Data Behind Two Digital Reporting Strategies argues that online news consumers crave both: fast and short, plus in-depth.

According to DVorkin, readers devour brief and timely information, but they also seek out the in-depth coverage that news stalwarts feared would disappear in the digital age – particularly when this coverage is about health care.

He offers the illustrative case of Forbes journalist and Medicine Show blogger, Matt Herper, described by DVorkin as “a walking, talking, posting encyclopedia of nearly everything that has to do with medicine”.

In an informal graph that charts Matt Herper’s journalistic output online, DVorkin explains that it’s apparent that Herper started out posting quite a bit, but reduced his output as he discovered that long-form rhythm worked best for the topic, his audience and his traffic numbers. He explains:

“I think it’s partly because, in medicine, a lot of the challenge isn’t just pointing out what is important, but also why. For a piece to be really valuable, you may need to take the reader into another world.”

Consider, for example, my own piece last February about disease-mongering called “We Never Imagined People Would Think of Osteopenia as a Disease“. Here’s the short Coles Notes excerpt emailed to my subscribers on the morning it was published here:

“There was no payroll, no building, no office – but drug giant Merck invented its own non-profit, the ‘Bone Measurement Institute’, to help sell more of its Fosamax drug.”

If that teaser intrigued you, you could then click on the full article (a whopping 3,200+ words – a long post even by my standards!) for more details on Merck’s very brilliant drug marketing plan. It was a plan to convince consumers and their physicians that their drugs should be in the medicine cabinets of millions of women worldwide. But more broadly, this article also described Big Pharma’s plan to change the definition of what a disease is, and the role that drug companies can play in that change.  It also contained stats, sales figures, historical background, and extensive quotes from (and links to) academic and industry experts in their fields.

This kind of detail may not be for every reader, but if you’re a woman whose doctor has told you that you suffer from what’s essentially a made-up disease called osteopenia, and that you should now be taking Fosamax or any other bone density drug in the controversial bisphosphonate family, you are likely seeking far more than a Tweet-length blurb on the subject.

Please note that I LOVE WHITE SPACE here.  You’ll see in most of my essays a lot of  “quotable quotes”, bullets, interesting images, bold coloured text – anything to break up the piece so you’re not facing that dreaded solid wall of text.

Many years ago, when I was first taking web writing courses, we were taught that there’s a BIG DIFFERENCE, physically, between reading ink on paper as opposed to light on a screen. And according to Darren Rowse, founder and editor of ProBlogger, the ideal minimum length of a good online article is 250 words, and the maximum should be under 1,000 words.

But Darren wrote that back in 2006 (a lifetime ago in the tech world)  – before gadgets like eBook Readers exploded in popularity.  Now, we read entire novels on our little screens – and we like doing it, apparently.

Meanwhile, Matt Herper’s online audience over at Forbes.com is trending up, even as his writing output slows down. That’s also my experience here on The Nag: I now rarely new posts compared to previous years, but readership here has doubled compared to this time last year.

And this post turns out to be among my shortest ever: a mere 860 words!

10 thoughts on “Short vs long online articles: which are better?”