“After many reminders constant nagging much encouragement from my lovely wife to get the snowblower sold, I finally got off my butt and posted an ad on Kijiji.”

And that’s when some pretty amazing things started happening in the life of a Canadian man named Weh-Ming Cho. Cho lives in Moncton, New Brunswick (that’s in the pink part up there, about an hour’s drive from the 8-mile Confederation Bridge to Prince Edward Island).

Last Wednesday morning, he posted an online ad on Kijiji to sell his snowblower during the first snowfall of the season. By Thursday evening, his ad had attracted a whopping 130,000 views, as Cho wrote on his blog, The Blognostifier.

He was bombarded with emails about his ad (over 1,400 so far) — some from as far away as Sydney, Australia — but most of them, he says, were not from potential snowblower buyers, but from people writing to simply say how much they loved his ad. And though not intended, Cho’s snowblower ad melted some hearts, attracting several date proposals. But he insisted:

He also claimed that he was just looking forward to having a snowblower-sized hole in his garage. Here’s how his since-removed snowblower ad published on Kijiji reads:

Do you like shoveling snow? Then stop reading this and go back to your pushups and granola because you are not someone that I want to talk to.

Let’s face it, we live in a place that attracts snow like Magnetic Hill attracts cars, only that ain’t an illusion out there. That’s 12 inches of snow piling up and, oh, what’s that sound? Why, it’s the snow plow and it’s here to let you know that it hates you and all the time you spent to shovel your driveway.

Did you want to get out of your house today?

Were you expecting to get to work on time? Or even this week?

You gave it your best shot. You tried to shovel by yourself and I respect you for that. I did it, my parents did it, some of my best friends did it. But deep down inside, we all wanted to murder that neighbour with the snowblower who was finished and on his second beer while you were still trying to throw snow over a snowbank taller than you are.

So, here we are. You could murder your neighbour, which could ensure that you won’t need to shovel a driveway for 25 to life, but there are downsides to that, too. What to do?

Here’s the deal. I have a snow blower and I want you to own it. I can tell you’re serious about this. It’s like I can almost see you: sitting there, your legs are probably crossed and your left hand is on your chin. Am I right? How’d I do that? The same way that I know that YOU ARE GOING TO BUY THIS SNOWBLOWER.

I want you to experience the rush that comes with smashing through a snowdrift and blowing that mother trucker out of the way. The elation of seeing the snow plow come back down your street and watching the look of despair as your OTHER neighbour gets his shovel out once more while you kick back with a hot cup of joe (you don’t have a drinking problem like that other guy).

Here’s what you do. You go to the bank. You collect $900. You get your buddy with a truck and you drive over here. You give me some cold hard cash and I give you a machine that will mess up a snowbank sumthin’ fierce. I’ve even got the manual for it, on account of I bought it brand new and I don’t throw that kind of thing away.

Don’t want to pay me $900? Convince me. Send me an offer and I’ll either laugh at you and you’ll never hear back from me, or I’ll counter.

You want a snow blower. You need a snow blower. This isn’t some entry level snow blower that is just gonna move the snow two feet away. This is an 11 HP Briggs and Stratton machine of snow doom that will cut a 29 inch path of pure ecstasy.

And it’s only four years old. I dare you to find a harder working four-year old. My niece is five and she gets tired and cranky after just a few minutes of shoveling. This guy just goes and goes and goes.

You know what else? I greased it every year to help keep the water off it and the body in as good as shape as possible. It’s greasier than me when I was 13, and that’s saying something.

You know how many speeds it has? Six forward and two in reverse. It goes from “leisurely” slow up to “light speed”. Seriously, I’ve never gone further than five because it terrifies me. I kid you not, you could probably commute to work with it dragging you.

You know what else is crappy about clearing snow in the morning? That you have to do it in the dark. Well, not anymore! This has a halogen headlight that will light your way like some kind of moveable lighthouse (only better, because lighthouses won’t clear your driveway).

Oh, and since it’s the 21st century, this snow blower comes with an electric starter. Just plug that sucker in, push the button, and get ready to punch snow in the throat. If you want to experience what life was like in olden days, it comes with a back-up cord you could pull to start it, but forget that. The reason you’re getting this fearsome warrior was for the convenience, so why make it harder on yourself?

By this point, you’re probably wondering why I would sell my snowblower since the first snowpocalypse is upon us today.

I’ll tell you why: because I heard it was time for you to man up and harness some mighty teeth and claws and chew your way to freedom, that’s why.

When interviewed about his unexpected online popularity by Canada’s national broadcaster, the CBC, Cho observed:

“I feel like I should use this newfound power and fame to do something worthy. But instead, I’m just going to continue to try to get people to buy my snowblower.” 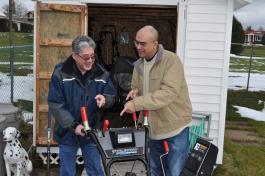 NEWS UPDATE:  Weh-Ming Cho’s famous snowblower has now found a new home! Here’s a shot of him highlighting the features of his ‘machine of snow doom’ to lucky buyer Alec Bruce (at left). By now, Cho’s ad on Kijiji has been viewed 495,000 times, with over 50,000 linking to it on Facebook.

Find out more on his post, The Snowblower That Ate The Internet.

4 thoughts on “How to sell your snowblower in New Brunswick”