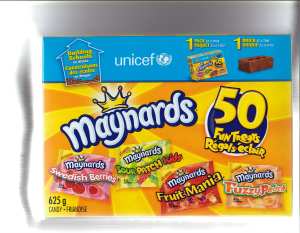 The chickens are getting into bed with the foxes, folks.  For example, after the charity Save the Children received a $5 million “gift” from Pepsi Cola, the non-profit organization suddenly and inexplicably decided to drop its advocacy campaign to tax sweetened soft drinks as one way to combat childhood obesity.

A mere coincidence, or a backroom agreement to hush Pepsi’s vocal adversary, sweetened by a $5 million “gift”?

And now Roger Collier, writing in the Canadian Medical Association Journal, tells us of yet another example of these surprisingly questionable marketing partnerships between charities and corporate advertisers – this time, it’s UNICEF and their new best friends over at Cadbury chocolates. Collier explains:

“Some health experts believe UNICEF made a poor choice by partnering with a company that makes high-calorie food targeted at children, especially considering that one of the charity’s causes is promoting proper nutrition for children.”

UNICEF, the United Nations Children’s Fund, has partnered with candy maker Cadbury Adams Canada Inc., which has given UNICEF $500,000 over three years to build schools in Africa. In exchange, Cadbury was allowed to put the widely recognized UNICEF logo on packaging for its products.

Dr. Marion Nestle, NYU professor of nutrition and author of Food Politics and Safe Food, is one of those health experts who are critical of corporate partnerships between industry and charity. She told Collier in the CMAJ interview:

“It’s unlikely that businesses have altruistic intentions; rather,they are looking to associate themselves with good causes to create a ‘halo effect’ in the hopes of improving sales. It’s not because these people are evil. It’s because their job is to sell more product. These are eat-more, sell-more strategies. It is sugarwashing. It sends a message that if you buy this candy, you are doing good for uneducated kids in Africa.”

“We invite you to involve your organization in a rewarding partnership and unique business opportunity.  Enhance your brand. Support UNICEF Canada through a corporate initiative. We are the leader in our field, with a history spanning more than six decades and a reach extending to more than 150 countries and territories around the world. Our long experience and worldwide presence have made us experts in navigating global markets. We have built direct relationships with governments, businesses and community leaders in every jurisdiction where UNICEF is present. No other aid organization engenders greater trust. None has greater impact.  Make us part of your business strategy.“

According to Dr. Nestle, corporate sponsorship by the food industry —unlike the tobacco industry — is not subject to public scrutiny.

This may explain how such partnerships as the much-criticized2005 deal between the American Diabetes Association and CadburySchweppes, a major producer of soft drinks, come to exist. Other companies that sell high-calorie foods, such as Frito-Lay and Kentucky Fried Chicken, have associated themselves with the fight against breast cancer, a tactic that has been labelled “pinkwashing“.

Read Roger Collier’s article Critics say UNICEF-Cadbury Partnership is Mere Sugarwashing from the Canadian Medical Association Journal, or the New York Times piece on Pepsi’s “grant” to Save The Children and how it may affect STC’s ongoing partnership negotiations with Coca Cola.