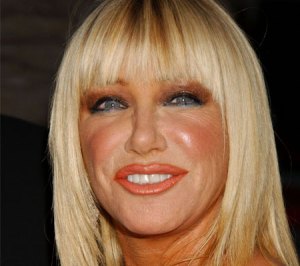 Arlene Weintraub is a senior health writer at BusinessWeek, writing on both science and the business of health. She has won a whack of  journalism awards, including from the Association of Health Care Journalists, but it’s her book, Selling the Fountain of Youth, that caught my eye. In particular, she questions the “expert advice” of celebrities pushing questionable anti-aging advice. And few celebs are better at flogging questionable anti-aging advice than Suzanne Somers.

A few years ago, Weintraub explains, former television star Suzanne Somers embarked on a new career: she became a proponent of bio-identical hormones, which she describes as safe and natural therapies for menopausal women. She wrote three bestselling books on the topic, The Sexy Years, Ageless, and Breakthrough. And she now appears in a documentary movie called Suzanne Somers’ Breakthrough Tour.

In the trailer for this theatrical event, Somers declares:

She urges you to see the movie to “learn how to reverse the aging process and really live your life.”

“I am among a small group of journalists, doctors and others who have been trying mightily to debunk Somers’ anti-aging theories. Why? It’s scientifically unsound to suggest that aging can be reversed. More importantly, Somers’ theories about how alternative hormone replacement can help menopausal women are flawed.”

Suzanne says: “Forgetfulness, bloating, migraines and flatulence in public can all be blamed on a lack of estrogen.”

But Arlene Weintraub says: “Smart people accept these symptoms as signs of growing older–not signs of a disease that needs to be treated with estrogen.”

Suzanne says: “You’ll lose weight sleeping if you sleep with balanced hormones.” (That is a direct quote–I can’t make this stuff up.)

But Arlene Weintraub says: “Show me the double-blind, placebo controlled study that proves people on hormones lose weight in their sleep.”

But Arlene Weintraub says: “Okay, this one deserves a little closer attention.

“Somers didn’t mention in the speech what type of thyroid she takes. But in her books, she parrots the advice given by the anti-aging industry, which is that everyone should take Armour thyroid, which is derived from pigs. I investigated this claim while reporting my book, and I don’t buy it. Armour thyroid fell out of favor in the 1950s, when drug companies learned how to synthesize copies of T4 – one form of thyroid, which the human body processes into another form called T3. The problem with Armour is that it contains both T4 and T3, which can cause an overdose of T3. That in turn can put patients at risk of atrial fibrillation and arrhythmias.

“And there’s another problem. Throughout this speech and her books, Somers expresses disdain for Premarin and PremPro, the estrogen products for menopausal women that are derived from the urine of pregnant horses. Somers believes bio-identical estrogens and progesterones, derived from soy and yams, are safer and more natural menopause remedies than Premarin and PremPro – a claim that’s never been scientifically proven.”But here’s a more basic question:

“Why is pig thyroid good, but horse urine bad?“

Find out more about Arlene Weintraub’s book, Selling the Fountain of Youth: How the Anti-Aging Industry Made a Disease Out of Getting Old – And Made Billions.

5 thoughts on “Anti-aging question for Suzanne Somers: “Why is pig thyroid good for us, but horse urine bad?””