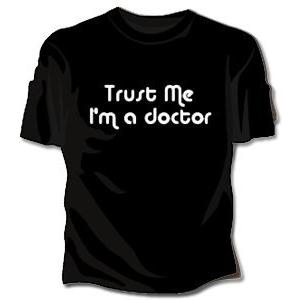 ProPublica is an independent, non-profit news agency that produces investigative journalism in the public interest – and this year, it became the first online newsroom to win the Pulitzer Prize for investigative reporting. When they start digging, they find something interesting. Lately, ProPublica has been investigating Big Pharma marketing,  particularly the growing practice of recruiting, training and paying doctors to give presentations to other docs about specific drugs.

They’re part of the pharmaceutical industry’s white-coat sales force, doctors paid to promote brand name prescription drugs to their peers — and if they’re convincing enough, to get more physicians to prescribe them.

Drug companies say they hire the most-respected doctors in their fields for the critical task of teaching their peers about the benefits and risks of their drugs. It’s important to them – one effective speaker may not only teach dozens of physicians how to better recognize a condition, but also sell them on the drug to treat it. The success of one drug can mean hundreds of millions in profits for a company, in an industry that saw prescription drugs sales top $300 billion last year in North America alone.

Recruited and trained by the drug companies, these physicians — accompanied by their Big Pharma sales reps — give talks to doctors over small dinners, lecture during hospital teaching sessions, and chat over the Internet.

Typically, they must adhere to company presentation slides and talking points. This is especially important because, although it is illegal for drug companies to advertise any unapproved “off-label” uses for their drugs, doctors can legally share information about off-label prescribing with their peers.

The ProPublica investigation has uncovered hundreds of speakers on drug company payrolls who have been accused of professional misconduct, were disciplined by their professional medical boards, or lack credentials as researchers or specialists. For example:

Investigators found 45 doctors who earned in excess of $100,000 a year as drug company Speakers Bureau presenters who did not have board certification in any specialty, suggesting they had not completed advanced training or passed a comprehensive exam. Most of those paid speakers also lacked published research, academic appointments or leadership roles in professional societies.

ProPublica’s review of physician licensing records found sanctions against more than 250 speakers, including some of the highest paid. Their misconduct included inappropriately prescribing drugs, providing substandard care, or having sex with patients.

Some of these doctors paid by drug companies to speak to other doctors had even lost their licenses to practice medicine.

More than 40 have received FDA warnings for research misconduct, lost hospital privileges or been convicted of crimes. And at least 20 more have had two or more malpractice judgments or settlements.

Meanwhile, the drug companies told ProPublica that they hire the most-respected doctors in their fields for the critical task of teaching about the benefits and risks of their drugs. They claim that their physician salesmen are “thought leaders” chosen for their “expertise“. GlaxoSmithKline, for example, said it selects only “highly qualified experts in their field, well-respected by their peers and, in the case of speakers, good presenters.”

But ProPublica reported that some top-earning speakers are experts mainly because the drug companies have deemed them such. Several doctors acknowledge that they are regularly called upon because they are willing to speak when, where and how the companies need them to.

Sociologist Dr. Susan Chimonas, who studies doctor-pharma relationships at the Institute on Medicine as a Profession in New York City, wrote:

“It’s sort of like American Idol. Nobody will have necessarily heard of you before — but after you’ve been around the country speaking 100 times a year, people will begin to know your name and think, ‘This guy is important.’ It creates an opinion leader who wasn’t necessarily even an expert before.”

Payments to doctors for promotional work are not illegal and can be beneficial to the drug companies. Strong relationships between pharmaceutical companies and physicians are critical to developing new and better treatments, says ProPublica.

“There is much debate, however, about whether paying doctors to market drugs can inappropriately influence what they prescribe. Studies have shown that even small gifts and payments affect physician attitudes.”

Read the rest of the ProPublica article, part of their Dollars To Docs report.