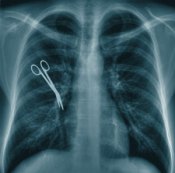 Surprisingly, the risk of being sued for medical malpractice has little to do with how many mistakes a doctor makes. Despite protests from doctors that malpractice lawsuits are born of greedy patients and their even greedier lawyers, analyses of malpractice suits actually show that highly skilled doctors can get sued a lot, while other doctors who make lots of mistakes never do. If I were a physician, I think I’d be very interested in why that happens.

Author Malcolm Gladwell helps to explain the reasons in his book, Blink:

Gladwell, in fact, tells us:

“What comes up again and again in malpractice cases is that patients say they were rushed or ignored or treated poorly.”

And medical mistakes may not even be reported by doctors. The Harvard School of Public Health reported in 2003 that physicians document less than 30% of their mistakes. And 44% of specialists claimed that that they were actively discouraged from reporting medical mistakes. More than 92% of patients, however, said that reporting of serious medical errors should be required, and most (63%) want this information released publicly.

Leape et al found in their 1994 study that the average hospital Intensive Care Unit patient experienced almost two errors per day. One out of five of these errors was potentially serious or even fatal. If these performance levels were applied to the airline or banking industries, Leape deduced, it would equate to two dangerous aircraft landings per day at the average airport, and 32,000 cheques deducted from the wrong bank account per hour. Imagine the litigation possibilities.

The University of Toronto’s Dr. Wendy Levinson is considered among the world’s foremost researchers on physician-patient communication. In a landmark 1997 study, she recorded hundreds of conversations between a group of physicians and their patients. Half of the doctors had never been sued, and the other half had been sued at least twice.

Levinson found that just on the basis of those recorded conversations alone, she could find clear differences between the two groups:

Levinson reported no difference in the amount or quality of information doctors gave their patients; the never-sued doctors didn’t provide more details about medication or the patient’s condition.

The difference was entirely in how they talked to their patients.

A UK study from St. Mary’s Hospital in London that also investigated patients who had taken legal action against their doctors came to similar conclusions. Research published in Lancet identified four main themes that emerged from their analysis of the reasons patients sue:

Overall, the London researchers found that the decision to take legal action was determined not only by the original injury, but also by insensitive handling and poor communication after the original incident.

Their conclusions warn that doctors should not view litigation solely as a legal and financial problem.  In addition, failure to provide information, an explanation, and an apology actually increases the risk of litigation and erodes the patient-doctor relationship.

But what about that apology? Wouldn’t saying “I’m sorry” because you’ve made a medical error be like admitting actionable behaviour? Southern Methodist University law professor Daniel Shuman, who has researched apologies in the field of law, explains:

“The likelihood of an injured party suing has less to do with the severity of the injury than with the actions of the doctor.  However, if the doctor expresses sympathy or apologizes, the patient or grieving family would heal faster and would harbour less of the negative feelings that can lead to lawsuits.”

Dr. Michael Kahn wrote an op-ed article two years ago in the New England Journal of Medicine called “Etiquette-Based Medicine.” He contends that there have been many attempts to foster empathy, curiosity, and compassion in clinicians, but precious few to teach good manners.

“It’s just not a value that we work on,” Dr. Kahn said in a recent interview with Dialogue. Perhaps that’s reflective of a society that’s less polite in general, he proposes. But he’s emphatic that common courtesy can make a profound difference in the doctor-patient interaction: “It gets things off on a good footing, it lowers the patient’s anxiety, gives them less ammunition to be hostile, and makes them more favourably disposed to you.”

Dr. Wendy Levinson would likely agree. A University of Toronto news release last June quoted her as saying that, although her colleagues are often more focused on their medicine than their communication skills, she knows consumers can certainly relate to the need to enhance doctor-patient communication.

“At cocktail parties, when I tell other doctors what I do, they’re not really interested. But if I tell patients, they ALL have a story to tell.”

22 thoughts on “Why doctors get sued”