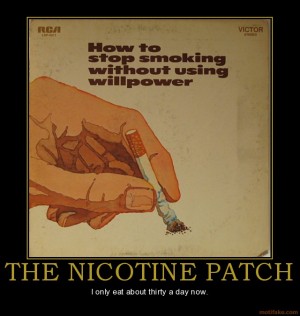 I am every smoker’s worst nightmare. As an ex-smoker myself  – it was the 60s during my art college days, what can I say? –  I now have little tolerance for smokers who whine about how tough it is to quit. Back when I finally decided to kick the stinky habit, before marrying David (my anti-smoking fiancé), we were still 20 years away from modern quit-smoking help. There were no nicotine patches or pills or gum or any program to help us. It was just white-knuckling cold turkey and hard candy all the way – what scientists call unaided smoking cessation.

But Australian research published this spring in the Public Library of Science Medicine now suggests that unaided cessation methods (cold turkey or gradually reducing before quitting) is actually the most successful way to quit after all, despite Big Pharma’s expensive campaigns to convince us why we need to buy their products if we really want to quit.

In fact, as with problem drinking, gambling, and narcotics use, population studies show consistently that up to three-quarters of smokers who permanently stop smoking do so without any form of assistance.

According to study authors Dr. Simon Chapman and Dr. Ross MacKenzie of the University of Sydney’s School of Public Health:

“Paradoxically, the tobacco control community treats this information as if it was somehow irresponsible or subversive and ignores the potential policy implications of studying self-quitters. Unassisted cessation is seldom emphasised in advice to smokers. We know of no campaigns that highlight the fact that most ex-smokers quit unaided even though hundreds of millions have done just that.”

Ironically, the Australian study reminds us that, in the rare literature that has bothered to even ask, many ex-smokers recall stopping as less traumatic than anticipated. For example, a large 1980s study of ex-smokers (before the advent of all this pharmacotherapy help) found that:

Research on cessation is dominated by ever-finely tuned accounts of how smokers trying to quit can be encouraged to do anything but go it alone —exactly the opposite of how a very large majority of ex-smokers have succeeded.

Finally, here’s a summary of the Australian research findings:

8 thoughts on “True or False? Most smokers need help to quit”