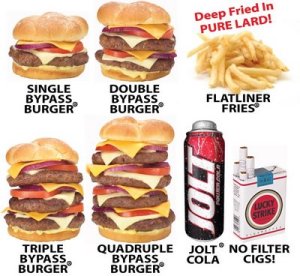 Warning! Reading this may induce squirming, revulsion and a strong urge to eat a raw carrot.

Consider the brilliant marketing strategy behind the Heart Attack Grill, a diner in Arizona that has hit upon a gimic that’s garnered world-wide attention. Owner Jon Basso claims that he has never spent one penny on advertising “and never will”, yet he’s cashing in on what he calls the “nutritional pornography” of his diner.

“Food So Bad For You, It’s Good” is a diner slogan, along with “Taste Worth Dying For”.

The Heart Attack Grill specializes in four obscenely huge burgers called the Single, Double, Triple or Quadruple Bypass Burgers, ranging from half a pound to two full pounds each of pure saturated fat. Jon Basso doesn’t even allow lettuce on his burgers. Waitresses are called ‘nurses’, customers are ‘patients’, and food orders are ‘prescriptions’. No sharing orders allowed. The hospital theme includes a wristband to indicate your order, and, if you manage to successfully choke down a whole Quadruple Bypass Burger, the ‘nurses’ will push you back to your car in a wheelchair.

You’d think that dieticians and nutritionists would be all over the Heart Attack Grill, yet ironically it’s the Arizona Board of Nursing that has launched an official complaint against it, not because of the artery-busting menu, but because of the scantily clad waitresses wearing skimpy, low-cut ‘naughty nurse’ uniforms, high heels, and thigh-high stockings.

But the part that stopped me cold is Basso’s incentive pitch:

The image of a morbidly obese 350+ pound person actually lining up at the diner scale to be publicly weighed in order to win a 2-pound Quadruple Bypass Burger is so not funny.

Instead, it is a scathing indictment of a society in which overeating is elevated to a spectator sport, where this revolting ‘entertainment’ is an end in itself, where we not only turn a blind eye to the very real health risks involved in pigging out on massive quantities of unhealthy food, but we actually celebrate this excess!

The 350-pound ‘winners’ who qualify to scarf down a free 8,000 calorie burger can never claim that they’re fat because of their glands, metabolism, genes or family history.

They are fat because they eat too much. Period.

Doesn’t all of this make you want to ask:

“What the hell is wrong with you people?”

And I’d bet you a dollar that owner Jon Basso has never himself had a heart attack, because only somebody who hasn’t would consider heart attacks to be an entertaining source of fun and profit.

Competitive eating even has its own ‘professional’ organizations that run the annual circuit of year-round contests (one of the biggest is sponsored by Alka-Seltzer). Contestants gobble corned beef and cabbage (10 pounds in 10 minutes), glazed donuts (49 in 8 minutes) or cow brains (17.7 pounds in 15 minutes).

Well, you get the idea. Are you feeling queasy yet?

Aside from being horrified that wealthy countries (world championship eaters come from the U.S. and Japan) are using overeating as sport while millions around the world die of starvation each year, I believe this is so wrong on so many levels.

It’s one thing to know that there are those who actually volunteer to ‘compete’ for moronic bragging rights (and minimal cash prizes) but what about those in the audience who actually like to watch this sickening ‘sport’?

Is it just me, or is our society going straight to hell in a handbasket?

And speaking of nutritional pornography – but only if you can stomach this – read Fast Foods: Seven Most Heinous Concoctions. Or the Texas State Fair’s new menu – including Deep Fried Butter.

See also: Chocolate-Covered Bacon and Other Ways To Alter Your Brain Chemistry.

Originally published on my other site Heart Sisters.