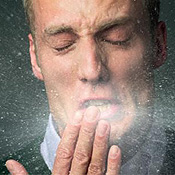 The bad news: scientists are predicting a pandemic of the H1N1 flu virus, commonly called swine flu.  The good news: you can make money from swine flu!  Jim Cramer, the nightly face of Mad Money on CNBC, suggests that stock market investors should climb aboard the gravy train that’s headed for big drug company profits thanks to anti-viral drugs. “Who do I think is the swine flu winner?” is his rhetorical query. “Gilead, a biotech company that developed Tamiflu in 1999. Gilead gets 80% of its sales from its fabulous HIV franchise. But it also earns royalties on the sales of Tamiflu.”

This is apparently how stockbrokers talk – referring to the HIV virus and accompanying drug sale profits as a “fabulous franchise”.

Tamiflu, the brand name version of the generic drug oseltamivir, is an anti-viral drug that is traditionally used in the treatment and prevention of Influenza virus A and Influenza virus B. Although researchers in the U.K. are already warning that Tamiflu will be useless agains H1N1 if the virus strain mutates (as flu viruses are annoyingly prone to do), nervous governments worldwide have started stockpiling the drug.

Cramer predicts that the currently undervalued Gilead stock has the unique ability to potentially provide “explosive returns in the event of a swine flu epidemic.”

He adds that this stock is a justifiable buy now for stock market investors “even if the swine flu hype does not materialize into a huge sales boost to Gilead. Investors could seize an opportunity in the growing public awareness of such a problem. Given that this is another strong flu year with swine flu coming on strong and we’re stockpiling Tamiflu left and right, I really think it has the power to move the numbers and thus more of Gilead’s stock.”

I wonder if Cramer is aware of Serum Institute of India Ltd., one of the three Indian companies now developing a vaccine against H1N1 flu.  Serum claims they will sell their vaccine at a fraction of the price of the U.S. products, the company’s managing director said.

“The cost of our vaccine could be anywhere between one-fifth to one-tenth the cost of similar vaccines being made in Western economies,” Cyrus Poonawalla told Dow Jones Newswires. Poonawalla said a European company is likely to launch the vaccine against strain ‘A’ of the H1N1 virus.

What if Serum’s cheap H1N1 vaccines takes off, and are effective enough to significantly reduce sales of Tamiflu (normally prescribed after you experience symptoms in order to reduce severity and duration of the flu)? What if those U.K. scientists predicting H1N1 virus mutation are right?

Those “explosive returns” will evaporate faster than you can say ‘sub-prime mortgages’. But with international broadcasting audiences hanging on his every word, it’s just a matter of time before the uninformed and the greedy believe and act on what Cramer is pushing.

2 thoughts on “Stock market tip: how to profit from the swine flu scare”