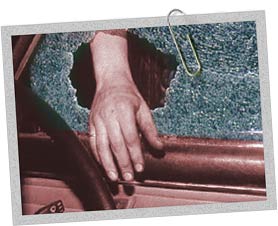 Everything I know about crime and punishment came from two main sources: my parents, of course, and later, the nuns who taught me at Mt. Mary Immaculate Academy, my convent boarding school.  They all agreed that the key characteristics of effective punishment are that it is both swift and consistently predictable.  Get caught red-handed tormenting your little brother?  You’ll be immediately administered a sharp smack upside the head.  Get caught smoking outside the convent during lunch break? Sister Mary Margaret will see to it that you lose your upcoming home weekend privileges on the spot.

Very simple.  Cause and effect. Logical consequences. No discussion. No argument.  No exceptions. Everybody knew the rules and everybody played by them.

Now there’s yet another source to back up this theory. Dr. Rick Linden, who teaches criminology at the University of Manitoba, tells us that this certainty of punishment may actually be far more important than the severity of punishment.

For example, Dr. Linden describes an innovative program launched in Winnipeg to address the Canadian prairie city’s out-of-control explosion of auto theft crime. In 2006, Winnipeg’s auto theft rate was a whopping 80 percent higher than the next highest Canadian or American city.  In fact, one in every five crimes in Winnipeg that year involved stealing a vehicle.

Here’s how it worked:  a targeted deterrence strategy was directed specifically at known high-rate offenders. These offenders were told they would be getting special attention, and that there would be zero tolerance for breaking the law.  Teams of police, probation and parole officers were assigned to ensure that these promises were kept.  Offenders were also given extensive support if they chose to leave their criminal lifestyles.

An inter-agency team in Winnipeg first identified over 100 of these high-rate offenders, and told them that they would receive curfew checks every three hours, and that violations would result in immediate charges.

Since 2006, auto theft rates there have dropped by 83%. The city of Winnipeg has 11,000 fewer crimes each year.  The $50 million cost of the program was quickly repaid, and Winnipeg motorists now save over $30 million a year on their insurance premiums.

An earlier targeted deterrence program reduced gang homicides in the city of Boston by 63 percent.  After successfully duplicating this program in several other cities, the U.S. government decided to invest billions of dollars supporting similar programs across the country as part of a program called  Project Safe Neighborhoods to help reduce gun violence in American cities.

But in contrast, the Canadian government tackled gang shootings in 2006 in a far different fashion: by legislating mandatory minimum 5-year sentences for gun crimes.  In the three years following this legislation, gang homicides and handgun homicides actually increased.

Earlier research suggests that longer criminal sentences are ineffective on any deterrent effects of imprisonment. Research by economists Drs. Steven Durlauf and Daniel Nagin, for example, concluded* that increases in sentencing severity and mandatory minimum sentences have in fact little or no impact on crime.

“Rather than wasting billions on new prisons, Canadians should invest this money in increasing the certainty of arrest for high-risk offenders, expanding proven social development programs to reduce potential offenders, and providing real support to victims of crime.

“If Canadians want to declare war on crime, we should at least use modern weapons.”