We didn’t decide on a name for our first baby until he was 10 days old.  My mother flew out to the West Coast from Ontario on that tenth day to discover, horrified, that my husband and I were still referring to her only grandchild as just “The Baby“. For example:

We eventually, at my mother’s insistence, decided to give him a real name: Benjamin, which satisfied our only criterion (a three-syllable name that could be shortened to one syllable).

When Ben was a few years older, he had a little friend at his YMCA day program whose first name was Blueberry (coincidentally also a three-syllable name that could be shortened to one).  This was in the 1970s, mind you. You can picture the kid’s parents, right? Dreads. Birkenstocks. Conscientious objectors to war and underarm deodorant.

Back then, some babies (both boys and girls) of Ben’s generation grew up sporting names like River, Sky or Marley (after Bob, of course).  But the top three names for baby boys in the late 70s were actually pretty traditional: Michael, Christopher, and Jason. Most popular names for baby girls included Jennifer, Nicole, Emily, Hannah or Sarah.

So three decades later, what names are parents in this millennium choosing most often for their kidlets?

The New York Times* recently pronounced that we’re now seeing unusual baby boy names like Iker, Crew and Zuri among traditionally strong classic names like William, David, Joseph and James, longtime stalwarts that remain perennial favourites. For boys, Joshua dropped off the Top 10 list for the first time since 1978. Replacing it was the name Aiden.

Or how about unique baby girl names like Electra, LaBoda, Maci, Tiana or Khloé (yes, thank the Kardashians for that one). The Times explained:

The New York Times also notes that the most popular first letter for boys’ names is J, as it was for much of the 20th century. The most popular first letter for girls is the once-obscure A, thanks partly to rising names like Addison, Avery, Arianna and Ava. And since 1990, the average length of a baby’s name has fallen to 5.9 letters from 6.2, a significant change given how little the average tends to move.

That newly fashionable name Addison for girl babies, by the way, may have gotten a boost from the fictional TV doctor from Grey’s Anatomy and Private Practice. In the first year alone of Grey’s Anatomy, the name Addison zoomed in popularity from 106th place to 28th in North America.

Celebrity influence over baby names is not new. If you ever meet a Canadian woman named Barbara Ann, for example, my bet is that she was, like me, born in the early 1950s.  I was one of 12 babies, all girls, born in a small St. Catharines maternity hospital at that time. Eleven of those 12 babies were named Barbara Ann, after Canada’s reigning Olympic figure skating champion, Barbara Ann Scott. (But my mother, never one to run with the crowd, chose Carolyn Marie instead).

But you won’t see many babies born in recent years who are named Carolyn. Like all the Gails and Lindas out there, my name peaked in the 1940s, as shown here: 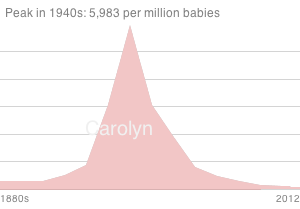 Dr. Michael Brody, a chair at the American Academy of Child and Adolescent Psychiatry, gave Today Moms readers one explanation for the growth of downright weird names for babies:

“People see celebrities having or adopting more and more children, and giving them names that attract even more attention to them; there is often the sense that they should do the same for their own kids.”

Last May, a study sponsored by the British parenting website Bounty.com reported that one in five parents regretted the name they’d selected for their child, either because they felt “the moniker was egregiously unusual” (that’s apparently how they talk in the U.K.) or because they’d discovered a more fitting name too late.

And sometimes, baby names are deemed so downright weird that the law gets involved. A few years ago, a New Zealand couple who (no kidding!) called their daughter Talula Does The Hula From Hawaii, was ordered to change her name. In giving his ruling (published July 2008 in New Zealand Law Reports), Family Court Judge Robert Murfitt voiced dismay over the growing New Zealand trend of giving children bizarre names.

He cited a list of unfortunate names that he said were embarrassing or “made children seem foolish among their peers”. The children from one New Zealand family, for example, were all named after six-cylinder Ford cars. Some names, including Fish and Chips (for twins), Yeah Detroit, Stallion, Twisty Poi and Sex Fruit, were actually blocked by registration officials. But others were allowed, including Bus Shelter, Midnight Chardonnay, and Benson and Hedges (naming twins after a cigarette brand?)

Brian Clarke, the New Zealand Registrar General of Births, Deaths and Marriages, said at the time that national law does not allow names which:

For some parents, picking the perfect name for The Baby is not just a social requirement, but a decision they believe will actually ensure the future happiness of that child. For instance, according to the website of the Kabalarian Philosophy (a fringe spiritual movement believing, among other things, that the effect of a name upon an individual can actually reveal the cause of sickness and disease):

“The meaning of baby names are the single most important influence on the development of your baby’s personality. Each baby name meaning has a hidden energy behind it which will greately(sic) influence your baby’s destiny.”

And while Kabalarians do recognize the importance of living a healthy lifestyle, consider their warning before you pick your new baby’s name.

“Even by eating properly, a person can suffer sickness if his mind, created by the name, is not in harmony with its instrument, the body.”

According to the Skeptics Dictionary, what is unique about KP is that its advocates insist that you can actually change your destiny by changing your name.

“Just call them up and they will help you do this (for the low, low price of just $95!) should you find another name with a better destiny than the one your ignorant parents unwittingly strapped on you at birth.”

KP testimonials online reveal, not surprisingly, incredible stories like the one from a man whose wife had been diagnosed with incurable leukemia after the birth of her second baby. But after consulting with Kabalarian elders about choosing better first and last names for the entire family, and then getting all four names legally changed, his wife miraculously recovered and lived another 38 healthy years.

While this may indeed sound like nutjob territory, it did remind me of a ‘change of name’ notification I once saw published in our daily newspaper in the Legal Notices column. A man with the first name of Harold was applying to legally change his name – to Lance.  I was immediately struck at that time by the thought that a change this drastic wouldn’t just mean a new name for Harold, but possibly even a new life!  Imagine what kind of exciting adventures a hipster like a Lance might be able to enjoy that would have been impossible for a dull Harold.

Or you might want to go online to check out numerology (the study of the occult meanings of numbers and their supposed influence on human life) when deciding on a baby’s name.  The best approach, according to one cyber-numerologist, is to pick the first name you want for your baby, figure out its numeric value, and add this to the numeric value for the family name. Then find a middle name that will bring the total to one of the numbers providing compatibility for both parents.

On the other hand, if you just want to take your creative chances with the universe here in our province (coincidentally the birthplace of the Kabalarian Philosophy), here are the 20 most popular names given to our British Columbia babies last year:

What did you name your baby, and why?

4 thoughts on “What are you naming your baby?”