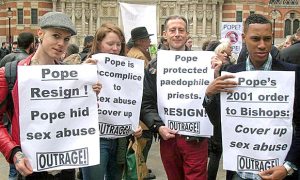 German Cardinal Walter Kasper, an aide to Pope Benedict, had been scheduled to travel with the Pope during his official state visit to the U.K. in 2010. But just before departure, he pulled out of the trip “for health reasons”, according to Vatican spokesman Federico Lombardi.

Perhaps what Lombardi actually meant to say was that the German cardinal seemed quite healthy at the time, but may have feared for his health if he ever sets foot on British soil. That’s because BBC Radio Scotland had reported that Cardinal Kasper actually told the German magazine, Focus:

“Someone landing at Heathrow Airport near London could mistake Britain for a third-world country, given the variety of people there.”

This is yet again another bizarre example of why the Pope and his pals so desperately need to stop talking to the media until they figure out what the heck is wrong with the way their brains are functioning.

And as a person who has spent decades in the public relations field, including doing my share of corporate media training, I offer the following examples of how the credibility of your organization – oh, let’s say the Catholic church, for instance –  can be severely impaired by putting an incompetent person in front of a microphone:

1.  On his first trip to Africa last year, the Pope declared that condoms were not a solution to the AIDS epidemic on the continent – but instead risked making the problem worse. (The Vatican had already claimed that condoms have tiny holes in them through which the HIV virus can pass, exposing people to risk, and even decreed that condoms should not even be used by already infected men in order to protect their wives). In an editorial at the time, the respected medical journal Lancet called on the Pope to retract his statement and said his comments could be “devastating for the health of millions of people”. The World Health Organisation responded:

“These incorrect statements about condoms and HIV are dangerous. In fact, consistent and correct condom use reduces the risk of HIV infection by 90%.”

The Vatican has now done a bit of a back flip on the condom issue, newly convinced that, well, okay, male prostitutes might be allowed to use condoms during gay sex.  Still no word on HIV-infected husbands being able to protect their wives, though.

2.  During his opening speech in Britain, the Pope attempted to blame atheism for the crimes of Nazi Germany, perhaps forgetting for a moment that Hitler regularly proclaimed his belief in a god as justification for dehumanizing Jews.

If the Pope wants to find modern examples in Britain of people dehumanizing other people, he might ask his colleague, Cardinal Cormac Murphy O’Connor, why he said last year on BBC Radio that atheists are not fully human.

3.  The Pope said in 2008 that homosexual inclination was not a sin in itself, but it represented a “more or less strong tendency ordered toward an intrinsic moral evil“, and that saving humanity from homosexual or transsexual behaviour is as important as saving the rainforest from destruction. Does the Pope’s harsh evaluation extend to his own predator priests who sexually molested young innocents for decades while the Catholic church and even Pope Benedict himself looked the other way from this systemic intrinsic moral evil?

4.   In May during a visit to Portugal, Pope Benedict called abortion and same-sex marriage some of the most “insidious and dangerous“ threats facing the world today. Really?  What about global threats like famine, war, child slavery, climate change, deforestation or any number of actual threats?  None of them apparently are nearly as bad.

While we’re waiting for the Pope and Federico Lombardi to enroll in a quality media training program, it’s reassuring to learn about groups like Catholic Voices, 22 British laypeople who took intensive media training before the Pope’s U.K. visit this year in order to learn how to respond correctly to media questions about the church’s protection of its child abusers and other sensitive issues.

7 thoughts on “Why the Pope needs media training”