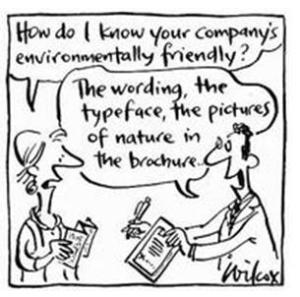 Forget ancient Greek mythology. There is no shortage of modern myths making the rounds. For example, there are lots of wealthy Nigerians who need your help transferring money between accounts, and of course Iraq has weapons of mass destruction. In the environmental movement, it can be especially hard to tell myth from fact, to ascertain the difference between corporate shills who are skilled in the new art of greenwashing – and those credible sources who can be trusted to actually give us the capital-T Truth.

For example, here’s a statement I used to believe was quite true: Al Gore is an environmental hero.  Everybody knows that. Well, actually, he is not, according to Planet Green:

“First, it was discovered that his Tennessee mansion, consumes more electricity every month than the average American household uses in an entire year. Then came news that just one week after co-hosting the mega-celebrity/media event ‘Live Earth’ to raise awareness of critical environmental issues, Gore and the guests at his daughter’s wedding in Beverly Hills ‘dined on Chilean sea bass – arguably one of the world’s most threatened fish species.’  Al Gore is a fallible human, just like you. As Chomsky says: “We shouldn’t be looking for heroes, we should be looking for good ideas.”

Or what about energy-producing wind turbines killing all those birds? A U.S. National Wind Coordinating Committee report suggests that “cars and trucks wipe out millions of birds each year, while 100 million to 1 billion birds collide with windows.”  Cats kill over 4 million birds per year. Compare those numbers with 2.19 bird deaths per wind turbine per year. Bad news for those birds, for sure, but not even in the same league of bird mortalities caused by un-green sources.

Curious about the truth behind free-range eggs?  Clean coal-fired power plants? Genetically modified foods grown to feed the world’s poor? Find out the truth about these and seven other false eco-beliefs at Planet Green.

2 thoughts on “12 shocking Eco-Truths with one small problem: they’re false”