From Dr. Lisa Wade and her team at the always compelling site Sociological Images comes the eternal question: why does the reality of air travel never quite match air travel advertising?

“At the same time that airlines try to ensure that planes take off with every last seat occupied, advertising for air travel typically does not depict fully booked flights.

“Frequent passengers covet the flight with an empty seat to their left or right, so marketers make sure that ads and commercials suggest that they might get lucky.”

But despite the reality of flying, here’s how airline industry ads prefer to portray the non-stop joys of air travel: 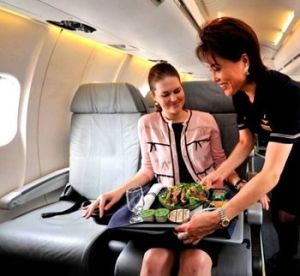 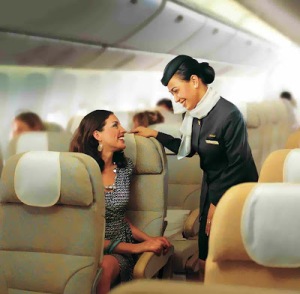 I have spent decades as a frequent flyer, both on business during my public relations career and on personal holiday flights. That also meant decades of flight delays due to fog, ice, bomb threat (1971), plane bits falling off (1978), stupid passengers behaving badly (1980-2012), or flying Air Jamaica. Decades of scary turbulence and hard landings. Decades of lost luggage, bad airline food, shrieking babies (some of whom were my own), surly airline staff, and the nightmare that is SFO. Decades of being sardined into overbooked aircraft alongside smelly, coughing, sneezing, snorting seatmates who hogged the armrests (some of whom were my relatives).

I rarely had those coveted empty seats beside me. And when I had a heart attack during an Air Canada flight from Ottawa to Vancouver five years ago, that pretty well killed off any further desire to set foot on any plane at any time ever again.

As I described it after surviving that cardiac event:

“Being strapped into a metal box 35,000 feet up in the sky, hour after endless hour, inhaling stale air with low oxygen content, in a pressurized germ-infested environment, with reduced circulating oxygen levels in my blood, risking the onset of hypobaric hypoxia, and with no guarantee at all that my seatmate would be a board-certified cardiologist seems just plain crazy.”

The following pictures, in fact, represent the actual reality for far too many air travellers: 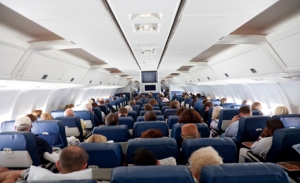