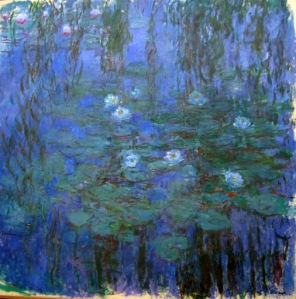 I vividly remember my first visit to the Musée d’Orsay in Paris, that cavernous museum lodged in a Beaux-Arts former railway station. After floating, enraptured, from one Impressionist gallery to the next, I turned a corner and suddenly found myself facing one of Monet’s famous series of water lily paintings. I’d seen pictures of this in Janson’s 1962 History of Art, and in slide shows back in art college classes, but here I was, actually standing in front of the massive original.

I burst into tears.

This spontaneous reaction was utterly surprising to me – but it might not be for those who study such reactions. This was likely, as Italian psychiatrist Dr. Graziella Magherini first described it in 1979, just a simple case of “La Sindrome di Stendhal” or Florence Syndrome. Looking at great art, she maintained, just might be hard on your mental health.

Florence Syndrome is “a temporary condition that causes rapid heartbeat, dizziness, panic attacks, fainting, confusion, nausea, and even hallucinations when an individual is exposed to art, usually when the art is particularly beautiful or a large amount of art is in a single place.”

But it’s not just art galleries or museums that can produce this reaction. Architecture often affects me this way; I once experienced a similar swooning reaction stepping into the Església de Santa Maria del Pi in Barcelona’s historic Barri Gòtic.  I also started weeping while watching spectacular fireworks one night at the Calgary Stampede! And, says Dr. Magherini, reactions like this have also been reported by those who are “confronted with immense beauty in the natural world”.

Florence Syndrome was described by the famous 19th-century French author Stendhal (pseudonym of Henri-Marie Beyle), who wrote about his experience with the phenomenon while viewing Renaissance masterpieces during a trip to the Italian city of Florence in 1817:

‘On leaving the Santa Croce church, I was seized with a fierce palpitation of the heart. The wellspring of life was dried up within me, and I walked in constant fear of falling to the ground.”

Dr. Magherini observed that Italians themselves are immune to this condition, perhaps already over-familiar with Florence and fatigued by its beauty.

Although psychiatrists have long debated whether Florence Syndrome really exists, its effects on some sufferers are actually serious enough for them to require treatment in hospital.

Staff at Florence’s Santa Maria Nuova hospital, for example, report admitting tourists suffering from dizzy spells and disorientation after admiring the statue of David, the masterpieces of the Uffizi Gallery and other treasures of this Tuscan city.

Florence is not alone in having a strange combination of symptoms named after it. Consider Jerusalem Syndrome, described as religious excitement induced by proximity to the holy places of Jerusalem; its symptoms usually resolve quickly on departure.*

Or how about Paris Syndrome, a slightly different affliction that doesn’t hit while you’re swooning over beauty or history, but because you are profoundly traumatized by your disappointment over the city. This reaction, especially common among Japanese visitors, has been described by the BBC in this way:

“Many of the visitors come with a deeply romantic vision of Paris – the cobbled streets, as seen in the film ‘Amelie’, the beauty of French women, or the high culture and art at the Louvre. The reality can come as a shock.

“It was a Japanese psychiatrist working in France, Professor Hiroaki Ota, who first identified the syndrome 20 years ago. On average, about 12 Japanese tourists a year fall victim to it, mainly women in their 30s with high expectations of what may be their first trip abroad.”

Is that a wee smirk on your face while reading this? Join the club. As Paris writer Chelsea Fagan wrote in The Atlantic about Paris Syndrome last year:

“This illness seems to have taken its place as the ’21st century gout’ – just slightly too privileged a problem to sympathize with.”

Meanwhile, Dr. Magherini is keen to stress that such reactions are not actually caused by any city itself.

“The fault is not in Florence, but in ourselves.”

None of these “syndromes” are included in the Diagnostic and Statistical Manual of Mental Disorders – the so-called “shrink’s bible“ published by the American Psychiatric Association. Not yet anyway.

Big Pharma might have time to start influencing the APA (as they’ve been so successful in doing so far) in coming up with a nice off-label use for an existing drug to be taken PRN to help ward off one of these Syndromes – like just before you head into the Musée d’Orsay.

Q:  Have you experienced one of the strange reactions described here?

13 thoughts on “The mental health perils of travelling abroad”