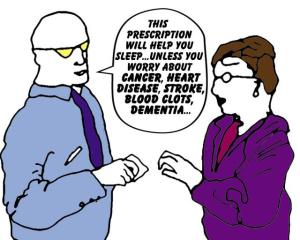 There is strong evidence that medical researchers’ financial ties to their industry funders may directly influence their published positions in supporting the benefit or downplaying the harm of the products they are “studying”.

For example, there is often a demonstrated difference between internal drug company documents about the research trial results that they fund, and the articles reporting that research that end up in the medical journals that your doctor reads.  The New England Journal of Medicine has referred to this practice as ‘selective outcome reporting’.

But for the sake of clarity, let’s just call it ‘lying’.

In other words, as a dull-witted heart attack survivor whose doctors have prescribed a fistful of daily cardiac meds, I have no clue which of those drugs has been recommended based on flawed research or tainted journal papers that have essentially been bought and paid for by the drug company who made my drugs. And, worse, neither do my doctors.

Here’s another textbook example: Dr. Mohammed Hassan Murad of Mayo Clinic reviewed* 202 published journal articles that addressed the now-recognized association between heart attack risk and the diabetes drug Avandia, made by drug giant GlaxoSmithKline. Among the journal article authors who (erroneously) concluded that Avandia does NOT increase the risk of heart attack, 86% had financial relationships with GlaxoSmithKline. But among authors of articles offering unfavorable reviews of Avandia, only 18% had relationships with GSK. For more on what can happen to you if you market your drugs like this, see the New York Times report, GlaxoSmithKline Settles Investigation with Record $3 Billion Fine in Avandia Settlement

This financial conflict of interest problem is now considered so pervasive, in fact, that those who do the studies are being studied themselves.

Regrettably, it turns out that medical researchers working on clinical trials “may not always follow best practices” when it comes to avoiding or minimizing the powerful influences  of those who give them money, which is the charitably tactful assessment by Dr. An-Wen Chan, also of Mayo Clinic.

Reporting on his study of financial conflicts of interests (specifically when it comes to Big Pharma-sponsored drug trials), Dr. Chan told Heartwire interviewers:

“Clinicians and researchers need to be far more aware going into studies about what potential conflicts of interest might arise with their drug trial sponsor, and take steps to prevent them early on.”

Dr. Chan and his colleagues asked 1109 researchers about their experiences with clinical trials conducted from 2001 to 2006 (across all medical specialties), inquiring specifically about these “best practices.” These included:

Dr. Chan reported that “clear problems” were identified – particularly in the industry-sponsored trials – when researchers were asked these key questions:

Conflicts of interests do not, of course, just impact researchers doing clinical drug trials. Consider these other examples of financial conflicts of interest reported from just one prestigious institution (Harvard University) as reported by the Center for Science in the Public Interest and their Integrity In Science conflict-of-interest project:

Which of these Harvard “experts” would you trust?

11 thoughts on “Who’s running the show in industry-sponsored drug trials?”