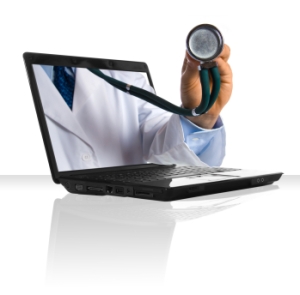 And here we go again. Yet another warning to doctors who decide they really must wade into social media. This warning is for those doctors who have learned nothing from the cautionary tale of 48-year old E.R. physician Dr. Alexandra Thran. She learned a hard lesson last year about the consequences of behaving badly online after she was fired from her Rhode Island hospital, fined and reprimanded by the state medical board.

Why? Dr. Thran had posted personal information online about one of her trauma patients. Although her Facebook post did not specifically include the patient’s name, she violated the patient’s privacy rights by writing enough that others in the community could easily identify the patient, according to a board filing.

And as Scott Hensley reported in his NPR health column last month:

“Doctors can and do say all kinds of derogatory things about their patients online. On the other hand, some doctors take another tack and use their computers and smartphones to ask patients out. And then there are the doctors who go online to prescribe medicines for patients they’ve never seen.”

Consider survey results published in the Journal of the American Medical Association recently revealing the input of state medical boards, the groups that license and discipline doctors.  Over half of the boards surveyed had restricted, suspended or revoked at least one doctor’s license at some point for behaving badly online.

The most common problems reported by the boards were:

In an earlier study of Twitter users, a team led by Washington, DC physician Dr. Katherine Chretien investigated what “self-identified physicians” were tweeting about. Their analysis of over 5,000 tweets from 260 Twitter accounts that each had at least 500 followers found that:

I can hear you saying:

“But Carolyn, only 3% were ‘unprofessional’- that doesn’t sound too bad, does it?”

Ask the average patient, however, and you’ll likely discover that we expect that percentage to be approximately zero.  Doesn’t this expectation, after all, go along with the very definition of the word “professional”? We don’t really care if the dumb schmuck sitting next to us on the bus behaves like an idiot, but we do expect those entrusted with making life-and-death decisions about our health to demonstrate competent decision-making abilities online, too.

Dr. Farris Timimi is the Medical Director of the Mayo Clinic Center for Social Media, so knows a thing or two about what’s appropriate and what’s not appropriate for health care providers to post online.  His brilliant 12-word social media guide for professionalism is:

And as Dr. Chretien told NPR:

“I’m all for physicians using social media to effect positive change in public health, advocacy, health literacy, or professional collaboration  (and have personally found it immensely helpful in getting information in my field — medical education), but very concerning is the potential patient privacy violations and conflicts of interest (‘buy product A and cure fibromyalgia!’) which clearly violate ethical codes and can hurt patients/the public.”

Some of the tweets, she observed, “reminded me of the snake oil salesmen of yesteryear.”

Making stupid sharing decisions about online posting is not limited to physicians. Consider, too, these examples of nurses who discovered the consequences of social media fun:

Now it’s not that I have anything against medical professionals who frolic topless with their patients, steal private health information like patient x-rays, or enjoy the occasional hospital food fight, but, honestly, what are these people thinking when they decide to go ahead and post the resulting evidence on Facebook for all the world to see?

Even worse, many health care professionals start young in their online stupidity.

Remember when Stony Brook University Medical Center in Long Island announced last summer that it was developing a “revised ethics policy” after a medical student posted a photo on Facebook of a classmate posing with a thumbs up next to a dead body?

That’s hilarious, kids.  Especially to the family of the deceased when the photo goes viral.

Results of another survey of 78 U.S. medical school administrators, reported in JAMA in September 2009, found that 60% of these administrators reported incidents of their students posting unprofessional content online on Facebook and other social media sites, most commonly:

Some of this online behaviour was serious enough to lead to disciplinary action, including the expulsion of three medical students.

Why do they do it? Why do these educated, privileged, otherwise-intelligent brainiacs feel compelled to share absolutely everything they’re thinking or doing or just thinking about doing?

Last year, Facebook founder Mark  Zuckerberg told Slate magazine an astonishing statistic about the Internet:  every year, people share twice as much online than they did the year before. According to Farhad Manjoo, Slate‘s technology columnist, people have come to call this Zuckerberg’s Law:  the more that people share through Facebook, for example, the more reasons people will have to keep coming back to Facebook, and the more central Facebook becomes in their lives. But he warns:

“Online sharing is fundamentally about choosing. You experience a huge number of things every day, but you choose to tell your friends about only a fraction of them, because most of what you do isn’t worth mentioning.”

“Most of what you do isn’t worth mentioning.”

That’s right, folks. What you just had for breakfast, for example.  Whether you are on your way to yoga or hockey practice. What music you’re listening to right this minute. Personal details about the trauma patient you treated in the E.R. this morning.

Last summer, the British Medical Association went one step further to limit self-absorbed online sharing: it warned medical staff and students not to ‘friend’ current or former patients on Facebook to avoid the risk of blurring the boundaries of the doctor-patient relationship.

Clearly concerned that doctors will repeat making the kind of stupid sharing decisions that have already landed many Facebook users in hot water, the BMA warning also cautioned against posting “informal, personal or derogatory comments” about their patients on social media sites.

And isn’t the mere fact that some health care professionals actually need to be told not to do so almost more troubling than the comments themselves?