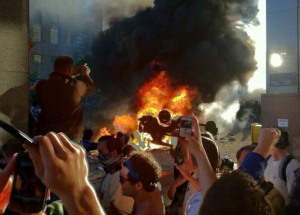 When I wrote here recently about the strange phenomenon of Facebook’s popularity with the self-absorbed (Why Narcissists Love Facebook), not even I could have guessed the apparent scope of the eye-popping stupidity and utter lack of judgement that some Facebook users are actually capable of openly demonstrating.

During several hours of the shocking Stanley Cup riots in downtown Vancouver, for example, a signature feature of the live television news coverage was the sea of bystanders with arms raised capturing countless images of violence, arson and looting via their cell phone cameras. And when the Vancouver Police Department asked the next morning for help in identifying the thugs who had terrorized their beautiful city, the response from outraged Vancouverites was immediate.

Here’s the unbelievable part, however: not only did bystanders send in their cell phone photos of rioters at work, many of the rioters themselves posted incriminating evidence on their own Facebook pages.

Not surprisingly, the curious urge of some to actually boast about their criminal activities via Facebook (complete with corroborating photographic evidence) is now leading to their undoing. At what point did these brainiacs conclude that posting self-incriminating evidence would be a good idea?

Until now, my chief complaint about Facebook was its attraction to those who honestly believe that others want to know every inane detail of their puny lives, things like (I am not kidding):

“I eat gummy bears by tearing them limb from limb and eating their heads last.”

Really? Seriously? Is there any moment or thought or deed that’s not considered so fascinating that some people feel compelled to urgently share it with the globe via the miracle of social media? Including crime?

“Facebook users have higher levels of total narcissism, extraversion, exhibitionism and leadership than Facebook non-users. Secondly, individuals with higher scores on exhibitionism also have higher preferences for photos and status updates than for the site’s other features.

“These findings substantiate the proposition that Facebook is particularly appealing for narcissistic and exhibitionistic people. In fact, it could be argued that Facebook specifically gratifies the narcissistic individual’s need to engage in self-promoting and superficial behavior.”

CBC News, in fact, has already reported a number of cases of Vancouver riot suspects being identified based on their own mid-mayhem Facebook photos and admission updates.

Meanwhile, police continue to track down criminals responsible for the June 15th riot that erupted onto the streets of downtown Vancouver after the final hockey game of the Stanley Cup playoffs between the Vancouver Canucks and the visiting (and ultimate Cup-winning) Boston Bruins.

The parents of one Burnaby teenager, for example, have turned him in to Vancouver police alleging he was involved in looting during the riot. The couple decided to contact police about their son after seeing the photos of looting at the downtown Louis Vuitton store that had been posted online.

Another CBC News report told of Vancouverite Ray Irvine, who was shocked to see online photos obviously posted by one of the rioters:

“Like all Vancouverites, I was outraged by the TV news coverage I saw that night. I couldn’t do anything to stop the riots, but I could do something so these criminals would not get away with it. I think they should all be charged and dealt with harshly.

“So when I realized that this young man had posted on his own Facebook page a full account bragging about his riot activities, including statements such as: ‘I torched like seven cars and looted at least three stores!’ – along with his full name and the name of his workplace – I forwarded his Facebook link directly to his employer’s public relations department, as well as to the Vancouver Police Department Tip Line.”

The public naming and shaming seems to be working already, although some more cynical than I am might quietly wonder why the eye witnesses who took the riot photos they’re now sharing did not attempt en masse to stop the thugs instead of laughing, hooting and partying amongst them as we watched on the TV news?

Why didn’t those 100,000 Canucks fans try to flee to safety when they witnessed the first police car torched, or when the first tear gas canister was lobbed into the crowd by Vancouver riot police? The destruction was not merely the work of an angry mob of heartbroken hockey fans on Wednesday night. As the blaring National Post headlines asked Canadians the next morning, above photos of dancing young people posing gleefully in front of overturned cars set ablaze:

“Why Are These People Smiling?”

My guess is that virtually all Vancouverites now feel pretty darned disgusted by these rioting hooligans – and also sickened by the images of tens of thousands who cheered them on. Former cop Dr. Robert Gordon, now the Director of the School of Criminology at Simon Fraser University, explains:

“People are now responding in the way they feel they can make the most difference. The vast majority of Vancouverites are very upset at what happened, and want to identify the people who were involved and have them punished.”

Many Vancouverites are also now empowered with physical evidence of the crime, something that is usually rare, he added.

Vancouver Police Department Chief Jim Chu said six of the rioters have already turned themselves in after their caught-red-handed photos went public, and police are now recommending criminal charges ranging from arson to unlawful assembly. Police say they will continue to use social media like Facebook to track down rioters, arsonists and looters.

Thousands of tips, and almost one million photos to help identify these morons have already poured into the VPD Public Assistance website. A team of 30 officers (including experts using image-matching facial recognition software to compare riot pictures against all provincial drivers license photos) were assigned to the investigation with more expected to be added.

Incriminating riot images that have gone viral already include those showing 17-year old elite athlete and Olympic hopeful Nathan Kotylak, who was filmed with a lighter and a burning rag being stuffed into the gas tank of a police car, later shown fully engulfed in flames while the crowd cheered. Kotylak attends a private school and plays water polo on Canada’s junior national team. But Water Polo Canada announced on Friday that it had suspended the high-level polo player from its national team after his riot activities were broadcast. In a fine example of parental over-protectiveness while splitting hairs, his father, a prominent surgeon, told the media that the photo of Nathan was “misleading” and his son did not light the police car on fire. But the Maple Ridge teen apologized publicly for his actions after speaking to police on Saturday. He told Global BC what he did was “dumb” and that he was merely “caught up in the moment.”

And Vancouverites now seem united in both their shame and condemnation of the night’s riot. Hundreds showed up unasked on Thursday morning with brooms and garbage bags to help clear the downtown streets of broken glass and burnt out debris. When plywood boards went up to replace the huge windows of The Bay (Vancouver’s iconic downtown department store that had every one of its main floor windows smashed by looters), Vancouver citizens quickly began covering the plywood with written apologies and thanks to those who had tried to stop the violence. And a Vancouver police car was found this morning blanketed with Post-it notes, each one a scribbled love note to the VPD members from passing pedestrians.

All of which is sweet justice for concerned Vancouverites like Ray Irvine, who described the Stanley Cup rioters this way to CBC News:

“If somebody’s going to be this stupid, they really do deserve to get caught.”

12 thoughts on “I rest my case: Facebook’s appeal to the truly stupid”