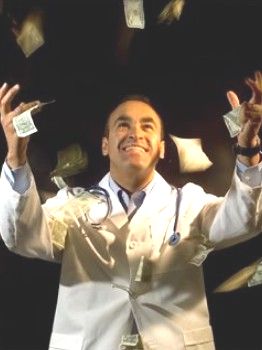 I have no objection to people working hard and earning a good living. But why do I feel ever-so-slightly squirmy when those people are physicians selling their own products to us? Apparently, I’m not the only one squirming. Many critics are uncomfortable with even the potential conflict of interest that exists when physicians attempt to boost their income by pitching retail products to patients. Dr. David Fleming, for example, of the University of Missouri Medical School’s Ethics and Human Rights Committee, takes a dim view of docs who go into the retail business. Interviewed by The Observer, the journal of the American College of Physicians and the American Society of Internal Medicine, Dr. Fleming explained:

“Doctors should not be in the retail business. It’s a slippery slope, using your professional powers to drive your practice economically.”

Cheryl Raven of  the non-profit Ethics Resource Center agrees. She claims that in some “underserved areas”, it may be justifiable for physicians to both recommend and then sell products to patients.

“In areas where it is not necessary, the conflict of interest inherent in recommending drugs or supplements and then selling them to the patient for a profit is too blatant to be acceptable.”

Here in my own province of British Columbia, our College of Physicians and Surgeons also warns doctors that this practice represents a clear conflict of interest:

“Promoting and selling medical or non‐medical products to patients for a profit is not only unethical, it constitutes a direct conflict of interest.

“Such transactions might reasonably be perceived as self‐serving. Even if there is no direct financial gain for the physician, the selling of products might be considered ethically questionable since patients often believe that a physician’s recommendation naturally implies an endorsement of the product’s value and/or efficacy.”

But the sheer volume of potential retail profits may mean a growing number of physicians who claim to see nothing wrong with the practice.

And many physicians who sell non-prescription products such as vitamins and nutritional supplements vigorously defend this business practice, claiming that it helps patients navigate an emerging area of health care while posing no more conflicts of interest than many other aspects of medicine.

According to The Nutrition Business Journal (the bible of those who earn a living making or selling dietary supplements),  the single most important contributing factor to the growth of the dietary supplement industry is strong recommendation by health care practitioners. Receiving the nod of approval from doctors and other health care providers is viewed as so important that many supplement companies have built entire businesses around solely selling through doctors directly. In fact, Kyle Bliffert, the president of Pure Encapsulations which sells its 350 supplement products only through doctors, told the NBJ:

“I believe the health care practitioner channel is going to be one of the most vibrant and fastest-growing sales channels in the nutrition industry over the next 10 years.”

While most of the physicians interviewed by The Observer readily admitted that they enjoy the extra income they get from selling products to patients, they also said they did it to help patients select the most appropriate products for their needs.

Dr. Orly Avitzur,  a board-certified neurologist who is also the medical adviser to Consumers Union, tells a story of a physician friend who had taken his daughter to her pediatrician because of a tonsil infection. Her doctor prescribed both an antibiotic (standard therapy) as well as two “immune-boosting”  vitamin supplements.

“When my friend asked about the scientific evidence to support this recommendation, the pediatrican responded that he takes them himself and hadn’t had a cold in five years. Even better, he was selling the pills right there in his office—$150 for each bottle.”

In the past, according to Dr. Avitzur, it was widely considered unthinkable for a physician to sell or even promote health products like this.  And while it’s not clear how many health care professionals engage in this practice, a survey of 600 medical doctors, naturopathic physicians, chiropractors, nutritionists, and other practitioners published last March in Nutrition Business Journal revealed that 76% of those surveyed admitted that they sell supplements in their office.

That remarkable figure, says Dr. Avitzur, does suggest that a significant number of mainstream medical professionals are now vying for a share of the $26.7 billion-a-year North American supplement market.

Despite the “handsome profit” possible with retail sales, Dr. Avitzur warns her peers of the “serious” inherent conflict of interest.

“It subverts the responsibility of physicians to place their patients’ interests before their own opportunity for financial gain. It also places undue pressure on the patient, especially if the pitch is aggressive. And it can erode trust in the doctor, as was the case with my friend.”

This may help to explain why the American Medical Association advises that physicians who distribute non-prescription health products should provide them free or at their own cost.  As Dr. Avitzur explains:

“This would remove the temptation of personal profit that can interfere with the physician’s objective clinical judgment.

“Such objectivity is especially important for supplements. Unlike prescription drugs, nutritional supplements don’t have to be proved effective or safe before they go on the market. And their labels don’t have to warn about side effects, even for products with serious hazards.”

Dr. Avitzur also reports that several patients have told her that they, too, have felt compelled to buy products from their physicians.

“What should you do if a health-care practitioner tries to push a supplement or any other product on you during your office visit? Find another doctor.”

Wondering about ordering these products online from one of those medical websites belonging to celebrity doctors? Consider this astute QuackWatch advice from longtime consumer health activist Dr. Stephen Barrett on how to spot a medical website that’s “quacky”:

The remaining section of this article that used to be here has been removed pursuant to a letter to me dated September 21, 2010 from the law firm of Skadden, Arps, Slate, Meagher & Flom in Boston, Massachusetts (firm/affiliate offices in Chicago, Houston, Los Angeles, New York, Palo Alto, San Francisco, Washington, Wilmington, Beijing, Brussels, Frankfurt, Hong Kong, London, Moscow, Munich, Paris, Sao Paulo, Shanghai, Singapore, Sydney, Tokyo, Toronto and Vienna). Skadden has been called by The American Lawyer “one of the largest and highest-grossing law firms in the world”, and Forbes magazine calls them “Wall Street’s most powerful law firm”.

Skadden, Arps, Slate, Meagher & Flom believe that the section of this article that used to be here – including quotes lifted verbatim from their client’s website! – contained “false and misleading information, and was defamatory in nature” towards their client, a celebrity doctor with a large online retail business.

Because the firm of Skadden, Arps, Slate, Meagher & Flom also warned me that they would “take those steps as it believes necessary to protect (the client’s) valuable rights” (which I interpreted to mean a threat of legal action) unless I removed the offending bits “no later than Friday, September 25, 2010”, and because they’ve already identified themselves on their own website as “aggressive litigators”, I have decided to follow their advice by deleting any mention here and in accompanying meta tags or reader comments about their client and his retail business – even though September 25th is actually a Saturday, not a Friday.

14 thoughts on “When doctors go retail: is it okay to sell products?”