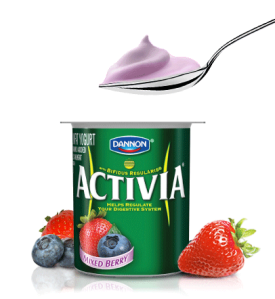 I like Michael Pollan‘s advice in his landmark book In Defense of Food: “Never eat anything you’ve ever seen advertised!”  And is there any food more heavily advertised than Dannon’s Activia yogurt with those probiotic/prebiotic bacterial cultures that hint at (but don’t exactly promise) magical digestive benefits if we eat Activia for 14 days?  Well, just as Michael Pollan warned us, it turns out that there is no scientific evidence to back up Dannon’s dubious health claims.

This is yet more bad news in a very bad month so far for Dannon, a subsidiary of Group Danone in France and makers of the top-selling yogurts worldwide.

Last month, a Los Angeles federal court heard that even Dannon’s own studies fail to prove that Activia has health benefits superior to any other brands of yogurt, in spite of the company’s claim that these benefits had been proven “clinically” and “scientifically”.

The L.A. court case ended when Dannon paid a $35 million settlement in a lawsuit alleging that the company had knowingly misled consumers in its Activia marketing activities.

(To put this ‘punishment’ into perspective, the settlement is just a wee bit more than the $31 million that Dannon spent on advertising Activia during just its first six months post-launch).

Their massive false advertising campaign convinced shoppers to pay up to 30% more for Dannon yogurt than for other yogurt with identical benefits. And shoppers ate it up, literally: in the first year after introducing Activia and its probiotic bacteria, sales shot up to $100 million in North America alone.

Probiotic bacteria are live bacteria that are supposed to not only help regulate your digestion, but also help improve your immune system. Dannon claimed that their yogurt helps to replenish these good bacteria to your system, thus improving your health. While the United Nation’s Food and Agriculture Organization agrees that probiotics may have a beneficial health effect, commercial claims must be backed up by research.

The problem for Dannon is that there’s no clinical proof that the probiotic Bifidus Regularis in Activia yogurt is better at preventing disease or regulating digestion compared to the friendly bacteria in any other yogurt products.

Because consumers have been duped into believing Dannon’s false advertising claims, Activia is now the best-selling yogurt in 25 countries, accounting for over 40% of Dannon’s total sales worldwide.

And according to an article in the journal Dairy Foods, Dannon only has up to go. North Americans consume barely 7.5 pounds of yogurt per person each year, compared to 18 pounds in the U.K. and a whopping 50 pounds in France, the Netherlands, Switzerland or Denmark.

Dannon’s parent company Group Danone has plans for what it calls its high health products. Danone has been very successful with these, and in various world markets it’s optimistically introducing new yogurts claiming to lower cholesterol, regulate digestion, strengthen the immune system, help regulate blood sugar, help control hunger cravings, and even improve the vitality of skin and hair.

But the recent Los Angeles $35 million settlement requires Dannon to not only reimburse consumers, but to change its advertising messages.

February 28, 2010:  Dannon has reached a settlement in a class action suit brought against it for falsely representing the health benefits of its yogurt. The company will pay up to $100 to individual consumers who have been misled by its “health claims”. Dannon must also remove the words “clinically”, “scientifically proven” and “immunity”  from product labels, as well as include a qualifier to its claim that its yogurt “helps strengthen your body’s defenses” or “helps support the immune system.”

See also: “Never Eat Anything You’ve Ever Seen Advertised” in my other site, Heart Sisters.