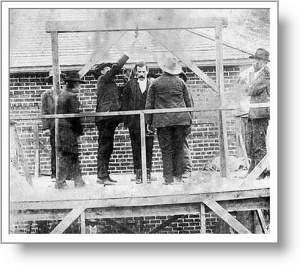 "An important civic function held in his honor"

I know there are many of my colleagues working in the field of public relations who cringe at the word ‘spin’, as in:

“What kind of positive spin can we put on this horrible mess?”

I am not one of them. Spinning can be an elegant skill (particularly when it means providing clarifying information that might be unknown to your stakeholders) – and more so because it is done rather badly by most.

Consider the spin on this story about a snobbish American politician who was dismayed to learn that his great-great uncle, Remus Reid, was hanged for robbing trains and stealing horses in Montana. In fact, the only known photograph of Remus is this one showing him standing on the gallows in 1889.  On the back of this photo is the inscription:

Pretty straightforward geneology – until you get the dismayed politician’s communications staff to rewrite history.

Here’s the new spin on Remus:

“Remus Reid was a famous cowboy in the Montana Territory. His business empire grew to include acquisition of valuable equestrian assets and intimate dealings with the Montana railroad. Beginning in 1885, he devoted several years of his life to government service, finally taking leave to resume his dealings with the railroad. In 1887, he was a key player in a vital investigation run by the renowned Pinkerton Detective Agency. In 1889, Remus passed away during an important civic function held in his honor when the platform upon which he was standing collapsed.”

Well, technically, it’s not exactly a lie, is it? But it’s clearly embroidering the truth to produce something more palatable to some. The trouble is that many of us can smell bad baloney a mile away.

During my years working in corporate public relations, specialized expertise in issues management and crisis communications was considered a key skill when doing business in a hostile market. No matter what our planned response was to any hot issue, I always asked myself – and my corporate bosses:

“How would we feel about seeing this response on the front page of tomorrow’s newspaper?”

That’s a question that a growing number of academics caught in bed with drug company-funded ghostwriters likely wish they had asked long ago. People like Dr. Barbara Sherwin of McGill University, for example. She’s just the first of a long line of academics identified in court documents obtained by The New York Times and the Public Library of Science Medicine recently in the latest in the longstanding tradition of fraudulent medical research ghostwriting.

These academics are now accused of falsely claiming to be the authors of ghostwritten medical journal articles that were actually commissioned by drug giant Wyeth Pharmaceuticals in order to sell more of their hormone replacement therapy drugs, Premarin and Prempro.

Sherwin claimed to be the sole author of a Wyeth-funded, ghostwritten paper published in the Journal of the American Geriatric Society. According to the Toronto Star:

That was before the HRT widely praised in Sherwin’s ghostwritten article was shown to actually increase women’s risks of developing heart disease and breast cancer.

Wyeth’s ghostwriters neglected to point out these risks in the favourable article supposedly written by Sherwin. Wyeth is now facing over 8,400 lawsuits from women who have suffered harm from their HRT drugs.

“Turns out that it was a drug company who was paying my ghostwriters!”

Quelle surprise… And of course, never before and never since this one little journal article to benefit Wyeth drug sales did she ever stoop to using ghostwriters for any of her medical journal submissions.

Maybe so, but I think that’s bad baloney I’m smelling here. Just as the horse thief and train robber Remus Reid was described, perhaps Sherwin and her Big Pharma pals are not really unethical – they are merely “key players in a vital investigation”.

Learn more about the unethical practice of medical ghostwriting.

Pfizer, the world’s largest drugmaker, and its Wyeth and Pharmacia & Upjohn units, have settled almost half of the lawsuits over its menopause drugs and increased the funds set aside to resolve the cases, the company said in a regulatory filing. The suits claimed the companies’ hormone-replacement medicines, including Prempro and Premarin, caused breast cancer, according to the Securities and Exchange Commission filing. Pfizer said it added $68 million to the $772 million it already reserved for the cases.

More than 6 million women took Prempro and related menopause drugs to treat symptoms including hot flashes and mood swings before a 2002 study highlighted their links to cancer. Wyeth’s sales of the medicines, which are still on the market, exceeded $2 billion before the release of the Women’s Health Initiative study sponsored by the National Institutes of Health.

At the height of the litigation, Pfizer faced more than 10,000 claims that its menopause drugs caused breast cancer, according to lawyers for former users.

Earlier this month, a Philadelphia jury ordered the Pfizer units to pay $72.6 million in compensatory damages to three women who blamed the drugs for their breast cancers. Pfizer agreed to settle the case before jurors were asked to decide whether the company should face punitive damages. Terms of the settlements weren’t released.